It is now a known fact that corals are threatened by global warming. Some scientists are even predicting the end of coral life by 2050. Meanwhile, there is still a mystery to solve : how some corals in American Samoa have resisted centuries of climate change to become giants and how others are thriving in waters so warm that it is normally considered deadly ?

The valley of giants

Her fist in the air with the thumb pointing down, Wendy Cover, the Marine National Sanctuary’s biologist from American Samoa, gives the sign that the dive can now begin. A last glimpse at each other on the surface before our masks are totally submerged, and we sink slowly towards the abyss of the Pacific Ocean. The water temperature is high ; my diving computer indicates 29°C. We are in the American Samoan archipelago along the coast of Ta’u, one of the most remote islands in the world. 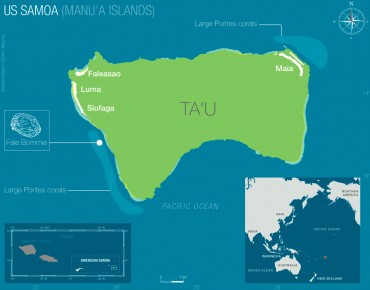 Barely a minute later, we reach 15 meters deep. We make a short stop to make our final adjustments.

Two underwater photographers are along with us : Richard Vevers is equipped with a camera that allows him to make great underwater panoramic photo shots. Christophe Bailhache is commanding the SVII S, a high tech camera attached to a pole, with a command tablet and a waterproof sealed sphere. The sphere houses three different cameras, positioned in a way that allows the machine to capture simultaneously the whole space around. On every dive, the SVII S takes hundreds of pictures which are then used by Google to create an “Ocean’s Streetview”.

Richard and Christophe have designed this device with the help of an engineer within their NGO called Underwater Earth. Their goal is to bring people closer to the Oceans. The pictures taken by SVII S allow anybody to experience virtual dives in unique places that would normally be unreachable. 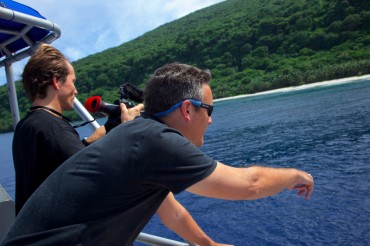 A hundred meters ahead of us we can already distinguish its massive shape. We know very little about this living giant. Its existence was only revealed to the scientific community in 1995 during an expedition led by Australian scientist Alison Green. At the time she was working with a local biologist, Fale Tuilagi, who had spotted this atypical coral reef along Ta’u shorline. But Green was far from imagining that she was going to come face to face with a true natural wonder. To pay tribute to her colleague’s discovery, the Australian scientist named the giant, “Fale Bommie”.

But the area is so remote and difficult to access that this giant colony has been almost unknown for years, up until other scientific expeditions reached Ta’u’s shores. They remained nonetheless sparse because of the complexity of such a trip.

It took us six whole months to get this expedition actually happening. Six months of cancelling and rescheduling because of violent cyclones. The operation is not only costly, but it has also a very high logistical need in one of the most withdrawn and secret places on earth. Nature still decides who can explore the place, or not.

After a couple of minutes, we finally reach our goal destination. The sea giant towers the place. 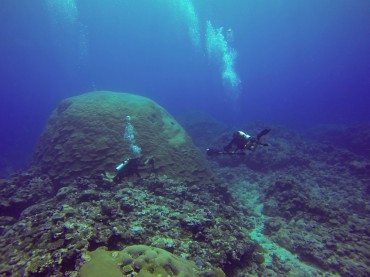 “Fale Bommie” is as impressive as it is massive : 41 meters in circumference and seven meters high. I can’t help but imagine a gigantic city populated by microscopic residents. Because Fale Bommie, like any other coral, is a complex living structure, constituted of millions of animals called polyps. The creatures living there stick together by creating a limestone skeleton, which they use as a shelter.

Underwater, the colony looks like a huge yellow lung. Two boxfish are continuously nibbling it, leaving regular scars on the coral’s surface, which is already heavily marked on its surface. Disturbed by our presence, a couple of damselfish are weaving in and out of the colossus, while a parrotfish is patrolling the reef zone surrounding the giant.

The rare scientists who were able to dive in the waters around Fale Bommie reckoned the coral’s type as Porites. This type characterizes itself by the formation of hard and compact blocs. Experts are still arguing on the name of the species : “Lutea” or “Lobata”. In both cases, the growth of these corals is extremely slow, hardly a centimetre per year. By this regard, Fale Bommie is one of the most ancient life forms on the planet.

According to the meager analyses made since the discovery of the reef, it seems it was born during the 15th century, some 14 meters deep, growing only a few millimetres every year until it peacked seven meters below the surface. We are dealing here with a natural wonder, centuries old.

Fale Bommie beats every record, size and age wise. But what makes the place even more unique is the fact that the giant is not alone.

In 2008, Paul Brown, one of the National Park of US Samoa marine biologists, led the first expedition dedicated to Fale Bommie, in order to unravel the mystery of this coral. He made a stunning discovery : at approximately one kilometre South of Fale Bommie, a dozen more Porites structures with a circumference between 16 and 24 meters are growing. While exploring the Northeast of the island, Paul Brown found even more massive Porites… All around Ta’u island, the Pacific has given birth to a valley of giants.

The scientists who are aware of the existence of these gigantic coral reefs agree on one thing : their abnormal size, good health and the proximity between the different colonies implies that the place has benefited from very stable conditions for several centuries.

Stanford professor Rob Dunbar is one of the first to bring specific information that confirm these assumptions. As a world famous paleoclimatologist, Dunbar studies the history of climatic changes with the evidence found in the coral’s limestone skeleton. In 2011, he was allowed to take several samples on Fale Bommie’s body. He was then able to give the exact age of the giant. It appeared to be born in 1479 ! The analysis also allowed him to study the history of climate change for the past 500 years. The scientist discovered that the last three decades were the warmest and the most rainy years of the coral’s entire life. More surprising fact : the colony never ceased to grow or felt any kind of thermal stress. Even during this warmest period. 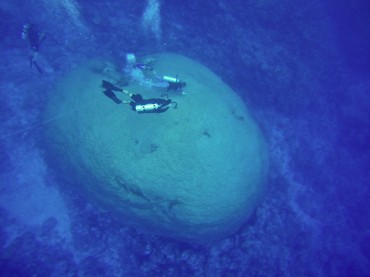 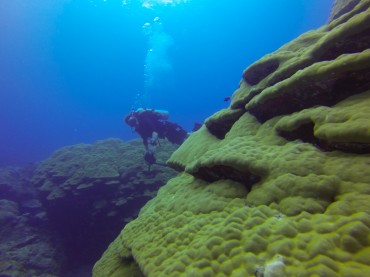 Coral and global warming specialist of the university of Queensland in Australia, professor Ove Hoegh Guldberg confirms that Fale Bommie is an extremely rare specimen : “Very few corals reach such an age. The environmental mutations – natural or created by climate change – and also the presence of predators such as the crown-of-thorns starfish, constantly threaten the corals during their growth.”

The crown-of-thorns starfish (Acanthaster planci in latin) is a carnivorous starfish. It is equipped with extremely venomous spikes and devours the coral reef’s polyps. To make matters worse, its high reproduction rate makes it a very invasive species, capable of wiping out entire colonies in a very short amount of time. A real plague for coral reefs.

Other threats are even more alarming : among them, global warming, powerful marine currents such as El Nino or even the ocean’s increased acidification are dangerously threatening corals all over our planet.

So how come these giants were able for so long to resist to these multiple aggressions ? How do we explain their healthy and steady growth when other corals bleach massively and die ? Will they be able to resist global warming ? Would it be possible that we find in the US Samoa answers that will help the scientists to further understand the future of our oceans ?

What happened next during my investigation would defy the most common scientific logic.