In less than an hour, our ship, the Bonnavista II, reaches the fishing dock of Ofu Island. The leader of Ofu is here to great us at our arrival. We follow the only road available, pass through a closed down airport before they drop us in the island’s only hotel: Vaoto Lodge. As soon as our equipment is unloaded, Stephen Palumbi’s research team takes us on a tour of the place. One of the bungalows has been transformed into a scientific lab. Corals are contained in a dozen of small reservoirs that are lighten up by powerful lamps, and are constantly being submitted to many different tests. 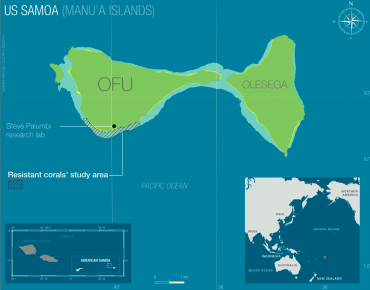 Outside, the scene is fantastic. Towering the island at 500 meters high and covered with a thick vegetation coat, Mount Tumutumu rises above the immaculate beaches. It’s in the crystal clear waters in front of us that Professor Palumbi has concentrated his work since 2005. In less than 10 years, Ofu Island has become an open sky laboratory where ambitious research on the corals is conducted. Oddly enough, the giant Porites lobata of Ta’u are not the sole reason that brought scientists from the most famous American universities to the other side of the world; another type of coral has captured their attention. On the outside they seem very similar to their peers, they are called Acropora hyacinthus and can be found all across the Pacific Ocean. Acropora hyacinthus or “table corals” are very common but the ones around Ofu have special characteristics: They are able to resist much higher temperatures than normal corals.

In 2001, Stephen Palumbi discovers in the magazine Coral Reef, an article written by the biologist Peter Craig. «At the time, what Peter Craig described went against the science’s common knowledge, Palumbi explains us. He described very diverse coral populations growing normally in very warm waters…». As soon as he arrived in Ofu during the early nineties, the Southern side of the island instantly called out Peter Craig. The lagoon hosted many different coral species. However, the water is usually very warm during the spring tides. «They were bleached corals in the American Samoa, way before the arrival of El Nino, Peter Craig tells us. But Ofu’s corals seem to have survived every threat.» 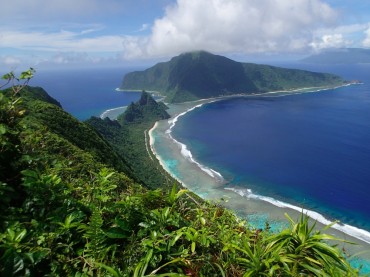 In 1998, Craig installed recording devices that allowed to measure the temperatures of many pools around Ofu’s lagoon. Soon, Craig got helped by his colleague Charles Birkeland. Birkeland discovered that Ofu’s coral reef is not made by a few resilient species of corals, but is rather constituted by a rare mix of 85 different species. By analyzing the results, Craig discovered that these corals can withstand daily temperature variations up to 6.3°C and can survive temperatures reaching 34,5°C on a regular basis. They seemed to be able to thrive in very unfavorable conditions.

In 2001, Peter Craig published the results of his research. He was convinced that Ofu Island could provide solutions against global warming; the scientist then advised researchers from all around the world to come and study the lagoon. The 300 residents decided to support the scientist. Cabins were built to easily accommodate future visitors. In the meantime, Charles Birkeland encouraged two of his brightest students, Lance Smith and Dan Barshis, to move in Ofu in order to carry out their thesis on the strange characteristics of Ofu’s corals.

When Palumbi and his team went to the site, they quickly realised that the island was offering the perfect conditions to pursue coral studies. «Even if Ofu’s access is tough, Steve Palumbi acknowledges, the working conditions are ideal. We are able to make all our observations and analyses with simple snorkeling equipment without needing any heavy diving equipment. The residents have made small and cosy bungalows available. The whole logistic is rather simple. It’s a major criteria when studying in the Pacific Ocean, because many places are fascinating to study but inaccessible or impracticable.» 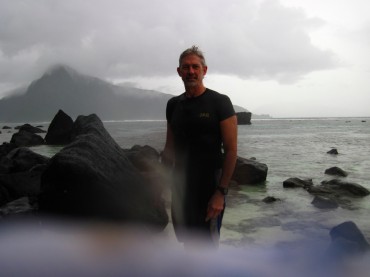 Aside from the logistical aspect, the environment is also remarkable. As described by Peter Craig, the corals evolve in a lagoon formed by several pools of different size and depth. Depending on their size, these pools have different temperature variations. During low tides, the temperature quickly reaches 34°C. In order to understand this uncommon resilience, Steve Palumbi’s team begins by sequencing the corals genes. Each species is tested, analyzed and compared to others to understand the specific mechanism in each of the lagoon’s pools. «We were able to compare similar corals living in different environments; some are tough while others aren’t», Palumbi explains.

To speed up the identification and localization of the toughest corals, the researchers standardized their tests: «In the medical field, we test the patients heart by subjecting them to physical tasks. We use a similar process for the corals. We heat up the water until it reaches a specific temperature during an extended amount of time. We then let the coral unwind and recover before testing its bleaching level. We had to find a way to repeat the test while also applying a standardized temperature stress level». Following this idea, the researchers from Stanford set up a series of small water containers connected to a laptop. The device allows heating up and cooling down the whole system at will. It’s a simple and effective work method.

Many years of study in Ofu and the assistance of dozens of students have allowed Steve Palumbi to draw two major conclusions: The first one is that Ofu’s corals have genes evolved enough to adapt themselves to unusually warm waters. The researchers have identified over 100 different genes that allow the corals to survive in waters often reaching 34°C. The researchers have also observed that the corals are able to live in pools subjected to extreme conditions. It appears that they are all linked to each other and have created a sophisticated biological adaptation mechanism. The different corals from the same colony withstand all together the temperature variations.

According to Douglas Fenner, a coral specialist hired by the American Samoa government between 2003 and 2012, Palumbi’s results, published in the prestigious magazine Science in May 2014, have revolutionized coral knowledge: «This major breakthrough gives us hope. Some corals would be able to adjust themselves to higher temperatures caused by global warming. This could give us a little more time to slow down global warming and save the corals». 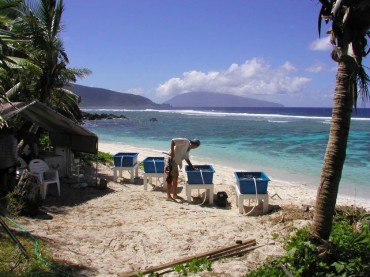 Not every scientist is as optimistic as Fenner. According to Professor Ove Hoegh Guldberg from Queensland’s University, even if some corals show remarkable resilience to high temperatures, they don’t stand a chance to adapt themselves quickly enough to the changes operating today: «The cumulated impacts of global warming and ocean’s acidification are more and more apparent and have disastrous consequences. Close to 75% of the world’s coral reef’s are threatened and 95% could disappear by 2050».

By following the actual forecast of CO2 and methane emissions, Hoegh Guldberg reckons that global warming and ocean’s acidification will not be able to stabilize before centuries to come: «The impact of a changing environment on coral populations is like a high jump event where judges continuously raise the bar a few centimetres. If it were the case at the Olympic games, the number of athletes would diminish as time flies and would end up disappearing. It’s the same with corals. They will never be able to produce strong and resistant new colonies if they are constantly struggling in an environment that changes too quickly. The genes found in my laboratory near the Great Barrier Reef or those found by Steve Palumbi in Ofu would be useful only if we were able to stabilize the ocean temperature now. Only then, corals could proliferate and reproduce the appropriate genome.»

Steve Palumbi knows that his work will not be able to stop El Nino from happening again, but according to him, his work can contribute to protect the areas where these super corals grow: «The corals observed in Ofu and elsewhere are extremely resilient to heat, but they aren’t immune to over-fishing, sediments, bulldozers or any other human activities that threatens coral life. It’s in this domain that authorities can make a difference in their protection duty.»

Moreover, Ofu’s super corals are also the potential parents of the next generation of corals. According to Steve Palumbi, we must help nature reproduce itself quickly; it is why he is concentrating a part of his resources in the study of the reproduction mechanism of the temperature resistant gene’s: «Of course, we could transmit the genes ourselves, reef by reef, but the impact would be minimal compared to nature’s ability to adjust itself. We are seeking a way to support a natural reproduction system for the reef, which would be able to transmit the coral larvas by itself. This would allow a natural colonization on a large scale and the creation of new reefs that are far more resistant to heat.»

During our last night in Ofu with Palumbi’s team, I learned that on the American Samoa main island, called Tutuila, right next to the airport, is a coral reef that bleaches… and comes back to life every year!