The biologists Kelley Anderson and Brian Von Herzen are working on Airport Reef, a coral reef that owes its name to its proximity with the airport of the island. What they discovered on one morning of April 2009 astonished them: the reef they left agonizing the day before had literally risen from the dead. The Staghorn corals (named after its resemblance with the animal’s antlers), have strangely regained their colors, although 35 hours earlier, the coral branches were critically bleached. This white color clearly means that the tiny unicellular algae named zooxanthellae that live in symbiosis with the coral, feeds it and gives it its colour, has expelled itself from its host.

The two biologists never would have imagined such a quick recovery. How did the coral got its zooxantellae back so quickly?

To achieve this, the corals just barely needed a little help from the two scientists. They placed a huge hosepipe near the reef and extracted the reef’s seawater to make it pass through a cooling device on the beach. This device diminishes the water temperature of one degree before sending it back on the same reef. A little less than 36 hours later, the zooxantellae have returned to their hosts to give them back, among other things, their colours. 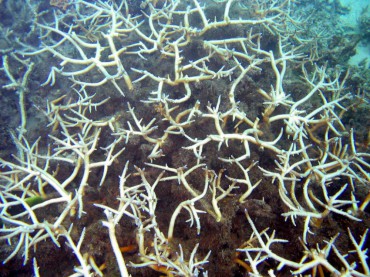 This wild idea consisting of cooling down the water with a generator was born a couple of years ago, from Douglas Fenner’s observations. Fenner is a passionate biologist who has been exploring the American Samoa’s waters since 2003. At that time, he was working for the Department of Marine and Wild Resources (DMWR) for the government. His study pointed out that every summer the airport Staghorn reef would bleach and then recover its colors during the winter.

It is important to point out that bleaching doesn’t mean that the coral is dead. When the water temperature rises to a critical level, the zooxanthellae leave their host. Consequently, the coral loses its sources of nutrition. Eventually, without the tiny unicellular algae, the reef will end up dead. But during a short period of time, it struggles.

Before knowing about Douglas Fenner’s research and observations, Brian Von Herzen tested between 2007 and 2008 some experiments: he extracted cold water from the bottom of the ocean thanks to a floating pump device in the middle of the ocean. When he met in the US the young biologist Kelley Anderson, who just obtained a student grant for her coral studies, they both were really enthusiast about finding an idea to cool the coral reefs in order to protect them against global warming.

However Kelley expressed concerns about the idea of sucking water from the bottom of the ocean in order to spread it on the reefs near the surface. In her laboratory in Tutuila she explains me what worried her in 2008: «Because of the high tenure of nutritious elements in the deep waters, there was a important risk of unbalancing the ecosystem and consequently have algae from the deep growing near the reef.»

The young scholarship researcher proposed another option: to use the reef’s water and cool it down. The project seemed exciting, but they were left with another problem: finding a suitable spot to experiment.

In 2008, at the International Symposium of Fort Lauderdale (Florida), Douglas Fenner presented his findings on Airport reef’s corals. Doctor Brian Von Herzen is amazed by the phenomenon. He quickly informed Kelley about it and a decision was made. The American Samoa heat resilient corals associated with Douglas Fenner’s discovery definitively convinced the two biologists that Tutuila offer a perfect exploration ground for their research. 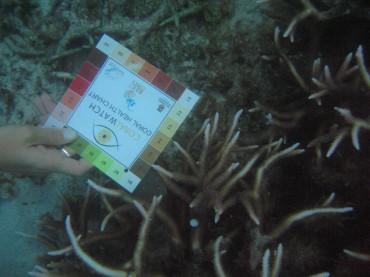 «The main element that convinced us to make our experiments at this spot is the predictable bleaching of corals, Kelley explains me. Thanks to Douglas’s work, we knew that this happens every year on this particular reef, even if it’s a small colony. I don’t know any other place in the world where it is possible to estimate precisely the beginning and the end of a coral bleaching process.»

The possibility of predicting the event has allowed the young scientist to plan her experiments. «Scientists spend their lives chasing coral bleaching around the world without knowing where and when they’re going to happen. Since we can’t define a specific place or date for the expedition, it makes the funding for these research very difficult.»

Thanks to the Samoa prediction, Brian Von Herzen and Kelley Anderson presented their project to the Pacific Islands Cooperation on Climate Changes (PICCC) which gave them the financial resources to start their research.

When the experiment began, the two biologists hoped to witness a coral recovery in the right period of time: «Usually, corals need three weeks to regain their colors back. We were convinced that this constituted the minimum time lapse needed by the zooxanthellae to settle back.»

Once their cooling system put in place on the beach, the biologists went snorkelling.

«The system failed on the first try, Kelley remembers. The air bubbles from the pipe weakened the corals next to the air escape. We immediately stopped the process and adjusted the hosepipe a few centimetres further before resuming our experiment. The next day we couldn’t believe what we saw: the coral recovered entirely its initial colours.»

The first experiment being a success, the scientists decided to go further. Kelley moved the water hose and turned it on other spots. The results went beyond their best hopes: on four different colonies tested, three reacted even faster.

«Only 18 hours! the scientist said out loud. With the second test, we have proved that the coral bleaching process can be reversed in less than 18 hours! Can you imagine? It was incredible! Who knew that zooxanthellae were world-class sprinters? I certainly didn’t.» 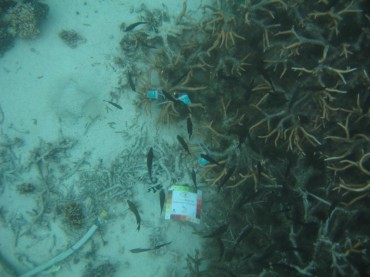 Even if the project has been momentarily put on hold, Kelley Anderson still pursues her investigation: «This project is very promising. I am actually working on the microscope images that I took of the zooxanthellae, both in a bleached and coloured environment. I hope that I will get a better understanding of why the coral is recovering so quickly there.»

For the local coral expert, Douglas Fenner, who is still on a daily basis observing the ocean’s depths of the American Samoa islands, Tutuila Airport Reef is still one of the most exciting research spot to study coral bleaching, because of this rare and unique predictability that seduced Kelley Anderson and Brian Von Herzen.

«Sadly, very few scientists come here to study what causes the bleaching and most of all how to stop it from happening,» explains Fenner. According to him, except from Kelley Anderson and Doctor Brian Von Herzen, the only scientist that explored Airport reef’s opportunities is Doctor Vania Coelo from the Dominican University in California. «She came here and proved the link between the sun and coral bleaching, and how shades can reduce the spread of coral bleaching.»

In opposition to corals that will need more shade in the years to come, the American Samoa archipelago will definitively need a maximum spotlight, if one day, we wish to give maximum chances to coral reefs around the world.