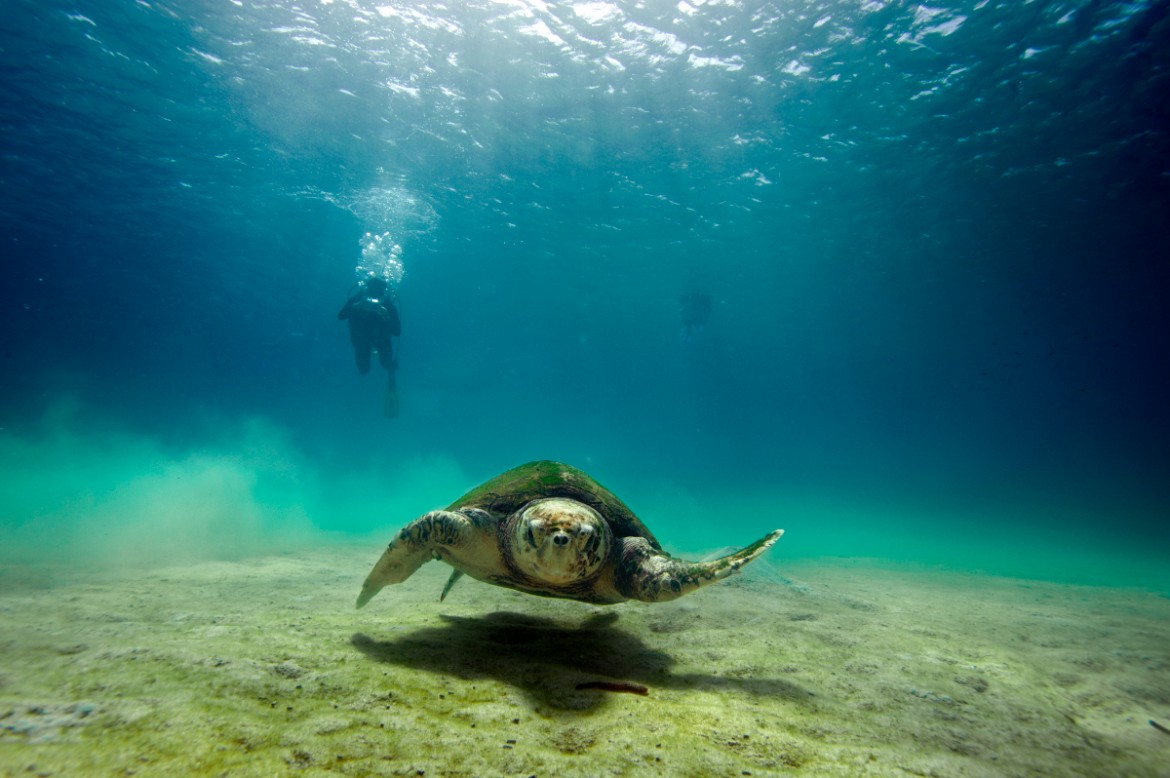 Dawn is breaking. With a steaming cup of coffee, I get out on the deck of our expedition yacht to join Lorraine who is navigating the boat while admiring the colours of the rising sun. We are gliding on the waves with a perfect regularity towards Lampedusa, the last island, the very last piece of European land before the immensity of the African continent.

Lampedusa, the end of the world 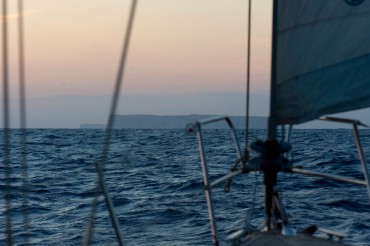 Dawn is breaking. With a steaming cup of coffee, I get out on the deck of our expedition yacht to join Lorraine who is steering the boat while admiring the colours of the rising sun. We are gliding on the waves with a perfect regularity towards Lampedusa, the last island, the very last piece of European land before the immensity of the African continent. By the way, the closest land isn’t Italy. The coast of Tunisia is only 120 kilometres to the West, and Sicilia is more than 200 kilometres North-East.

The crew took turns all night to stay on course and keep an eye out for dangerous situations. May is a month with an intense activity in this area. It is not unlikely to cross the path of one of the many fishing vessels that are targeting the migrating schools of bluefin tuna. Another night hazard is the presence of floating plastic cages used to trap the bluefin tunas and left to drift at sea by the towing boats that assist the fishing vessels. Finally, a close attention is needed to spot the ships that navigate lights off, packed with migrants escaping the harsh African life and seeking an alternative fate in what they believe to be the Eldorado: Europe.

To make matters worse, the weather isn’t on our side. For the past four days, a storm coming from the North-West has been sweeping the middle of the Mediterranean, forcing us to take shelter on the small Italian island of Pantalleria. As soon as the storm showed the first signs of weakening, we set sails again towards the South. The main objective of the expedition is to track and find the French tuna seiners that go as far as the limit of the Libyan waters to capture the most valuable bluefin tuna. In the huge Gulf of Sidra, the waters are among the warmest of the Mediterranean. Right here, the biggest tunas of over 100 kilograms swim all the way from the Atlantic to mate, year after year, at the same period. This is an opportunity that the French, Italian and Tunisian fishermen can’t miss. Nowhere else would it be possible to capture this kind of fish, alive and in such vast quantities. Navigating towards the Libyan waters, we planned to stop for a few days on the island of Lampedusa. A French contact informed us of an intriguing fact that we were curious to verify: on Lampedusa, there would be a surgical clinic for marine turtles.

Exhausted after more than 24 straight hours of navigation, we finally reach the flat and arid piece of rock 10 kilometres wide that is “installed” in the middle of the turquoise waters. The only port, on the South side, is actually more of a shelter for the fishing boats. The majority of them are old vessels, 15 metres long and made of wood, using long nylon lines with hundreds of hooks to fish. We understand from their registration numbers that all of them are Italians from the continent (Campania, Calabria, and Sicilia), coming to fish in the warm waters of the South what they may not be able to find in the North.

The only town on the island got built around the port. Small white and pastel coloured houses are the homes of around 6000 people year round. Much like a village where everybody knows each other, the locals are not surprised when we ask them with our basic Italian if a surgical clinic for turtles really exists on Lampedusa. Without so much as a word, they all point towards a large flat building at one end of the port.

The place is empty. We penetrate in a large room of a hundred square metres, with floor tiles as blue as the sea. In the centre, a glass showcase displays the skeleton of a turtle which was reassembled in order to better understand its anatomy. On the walls all around are displayed billboards in Italian explaining the different turtle species, their behaviour, diet and reproduction… Finally, we find ourselves before a table where a row of jars show the different turtle’s embryonic stages floating in a formaldehyde solution.

Our visit is interrupted by a tall woman with long dark hair who just entered the room, followed by her two dogs that are fooling around like children.

“Are you on holiday on the island?” she asks us in Italian. In a few words, I explain the goals of our visit and the interest we have for the centre. Daniela Freggi isn’t someone who is used to hide her emotions. “You really came to Lampedusa by boat? To see the clinic? It’s not possible? It’s wonderful!” she exclaims, in perfect French with a faint Italian accent. 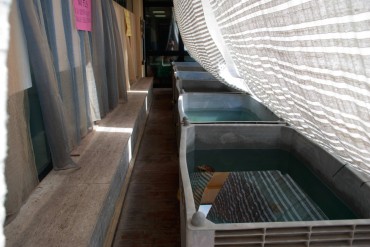 She then takes us through a door at the back of the room, to show us the inner yard where a dozen plastic tanks are lined up, half filled with sea water. In each of them, a marine turtles dives, and then comes back up for a breath of fresh air.

“These are the turtles we keep in convalescence”, explains Daniela while we are in admiration of the animals in the tanks, just like little kids would be. “We have to separate them, because they would kill each other if we were to put several in a single tank. It is one of their many singularities, they allow the presence of other turtles a few minutes every three years when it is time to mate in a little cove. The rest of the time, they “cordially” avoid one another. No doubt they are really solitary.”

Daniela then points out one of the tanks. “Since we opened the first centre on the island in the 90’s, we have been working a lot with the fishermen, because they are the ones at sea that spot the most of turtles, alive and well or injured. For example, this one right here has swallowed a fishing hook.” We can indeed see around 40 centimetres of nylon coming out of the mouth of the animal that doesn’t seem all that inconvenienced. “An Italian fisherman from the island of Favignana, West of Sicilia, recovered it while it was floating at the surface. It was then transferred by ferry to the Sicilian town of Trapani. From there, and by car, it reached Porto Empedocle some 120 kilometres away. It had to take another ferry by night to finally arrive in Lampedusa three days ago”.

I can’t begin to imagine how a marine turtle of 20 kilos can undertake such an important journey without being constantly kept in seawater. “It is not that complicated, explains Daniela. The marine turtles such as this one can easily stay several days out of the water. In Indonesia, they keep them in cages for several weeks before eating them. Their skin cracks and they become blind, but they can survive for a long time away from the sea…” says Daniela, visibly irritated. “No need to go far away to see such practice in the 21st century. In Egypt for instance, they keep eating turtle meat to this day”. 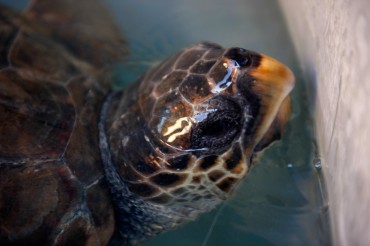 In general, people don’t seem very interested in protecting these prehistoric animals that don’t have such a pleasant face. The absence of data is clearly one of the main problems that face biologists such as Daniela, who perfectly know the reasons why the marine turtles need to be cared for at all costs:

“If one day the last turtle dies, it will be the day when we stop bathing in the sea because of the jellyfish. If only the people knew how close we are to this scenario…” she adds while observing the turtle calmly swimming in its tank. In Morocco during the year of 2008, a little over 12’000 persons had to be admitted to the hospital after being badly stung by a jellyfish. The same year, in Spain, it is 4’000 persons who needed urgent medical assistance for the same reason. “These numbers a really hard to get from the authorities, because they are keen to silence whatever could frighten the tourists, explains Daniela. But the reality is that the turtles act as regulators of the seas. They have always been the biggest predators of jellyfish. The day sea turtles disappear, it won’t be a few thousands of people who will get hurt, but closer to a few millions.”