As planned with Daniela, we get ready to meet at the mooring site around midday. It’s going to be tight. At 11 a.m., we should have finished monitoring by sailing boat the two coves that we located from land the day before. Wind direction, swell, water clarity, light… are amongst the factors we need to consider.

Two days later, at the break of dawn.

As planned with Daniela, we get ready to meet at the mooring site around midday. It is going to be tight. At 11 a.m., we should have finished checking by boat the two coves that we located from land the day before. Wind direction, swell, water clarity, light… are a couple of the factors we need to consider. We have to be in position at midday, the boat anchored in the cove, so that we can confirm to Daniela that the operation can begin. La Cala Pisana, located on the East side of the Island, proves to be that day the perfect scenery. The sea is turquoise and crystal clear. Furthermore, the sandy bottom acts as a light reflector. Pure joy for Philippe, the photographer. “The water is around 10 meters deep, and we can see the bottom!” he exclaims from the deck of the yacht. 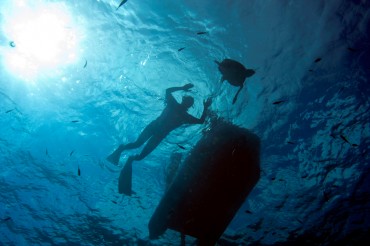 At half past twelve at the center, the first turtles are being loaded on the old truck. Meanwhile on the boat, we are preparing the gear and the air tanks for the dive. At 1 p.m. I jump in the water, followed by Philippe. We plan to anchor a little buoy on the sea bottom, so that the crew on the surface will know at all-time where we are. Because of our air tanks, the five first turtles have to be set free in a little less than an hour. Sebastien, the skipper, programmed a timer that will ring every 12 minutes, so that he knows exactly how much time is left while on the zodiac. Finally, we are lucky to count among the enlarged team a volunteer who is a skilled free diver. Maurizio wasn’t born close to the sea, but when we see him in the water with his mask and long fins, it seems that air tanks would only bother him. Effortlessly, he is able to hold his breath for over a minute while diving and playing 10 meters under the surface. Even more impressing is his ability to do all of this without carrying a weight belt. 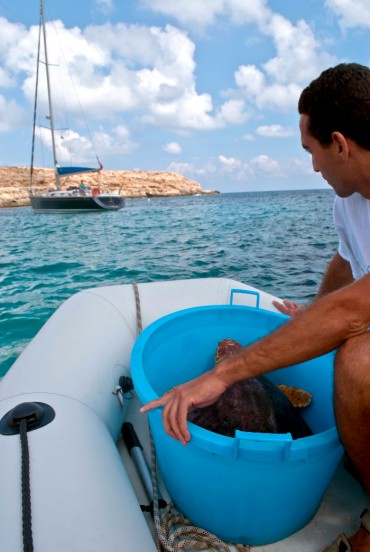 In short, Daniela and the crew of volunteers are on land, bringing the turtles from the center to the cove; Sebastien, Lorraine and a volunteer are on the zodiac that bring the turtles all the way to the little buoy; Maurizio is waiting and swimming at the surface, ready to put the marine animal in the water; finally, Philippe and I are half way down with our cameras to capture the first dive of the reptiles.

The logistic is important, but it is definitely worth the effort. In the Mediterranean, it is so rare to be able to observe marine turtles at such a close range. The aim is to follow their first “steps”, and to be careful not to disturb their fresh start.

In a little less than an hour, the release of the turtles is carried on with an almost perfect coordination. Everybody is precise and effective in their task. Maurizio is free diving over and over again, at a pace that is quite astonishing. The turtles seem to have an endless supply of energy, although only a few weeks ago they were being brought to the center, wounded, and with all sorts of hooks, plastic bits and nylon strings in their intestines. As soon as they are pulled out of their plastic bucket, they frantically agitate their legs as if they were swimming, except they haven’t touched the sea yet. Once in the water, these animals that are so clumsy on land are able to swim with disconcerting ease and speed. Even with their unpleasant faces, we feel their joy to be once again in their natural element. They are so fast that Philippe hasn’t got a lot of time to immortalize this magical moment. The youngsters are so impatient that they start swimming as fast as they can, without really taking care in which direction. Calmly, Maurizio catches them and sends them in the right way. Together they take a breath of fresh air, and dive again. A magical ballet. 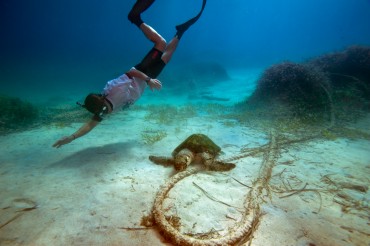 The sixth and last turtle of the day has a different story. It was wounded several times by boats’ propellers. These different accidents left the animal with a mutilated front left leg (from which came its nickname “Humerus”) and the second half of both back legs paralyzed. For now, it can only use them as stabilizers. When it was brought to Daniela three years ago, a decision had to be made: either it had to be killed, “what most of the other centers would have done” she tells us bitterly, or it would be sheltered, fed and trained to swim every week in a cove so that it can maybe recover. “For now, Humerus gets tired very quickly, but I am certain that one day it will regain the control of its lower back legs, she explains. When I clean it, I can feel that the back legs start to move again. The day it will be ready, we will set it free”. 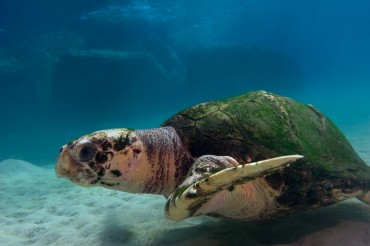 Until then, “Humerus” is the best advocate of its species for the tourists who are still the main source of income for the center. “You didn’t bother it, assures Daniela when we come back to the surface with Philippe. If it was the case, it would have tried to bite you. I have seen it in the past with people that got too close in the water”.

Its half-hour stroll is over so we put the gear back in place on the yacht. The anchor is pulled up, and we sail back to the port, exhausted but happy that this highly-anticipated day took place in such good conditions. Back at the center, a feeling of melancholy is in the air with the tanks lying empty in the yard. “They will soon be occupied again…” says Daniela with a hint of cynicism. I got a call from a fisherman from the island, apparently he caught two turtles in his trawl, and one must weigh around 50 kilos! A string of nylon 15 centimeters long is coming out of her bowels, God knows what mess it must be in its intestines.”

On Lampedusa, daydreaming is only allowed for very short time. Nature fights hard for its survival.

The reminder is often brutal. 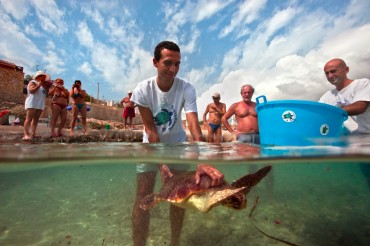 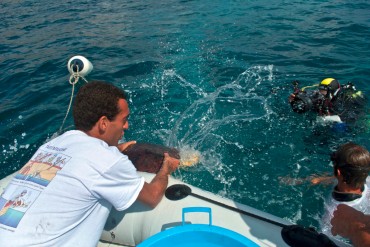 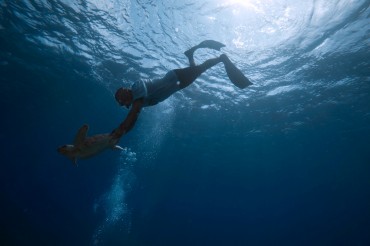 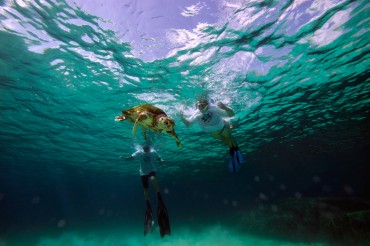 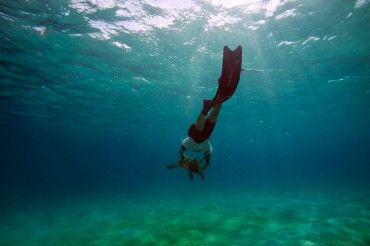