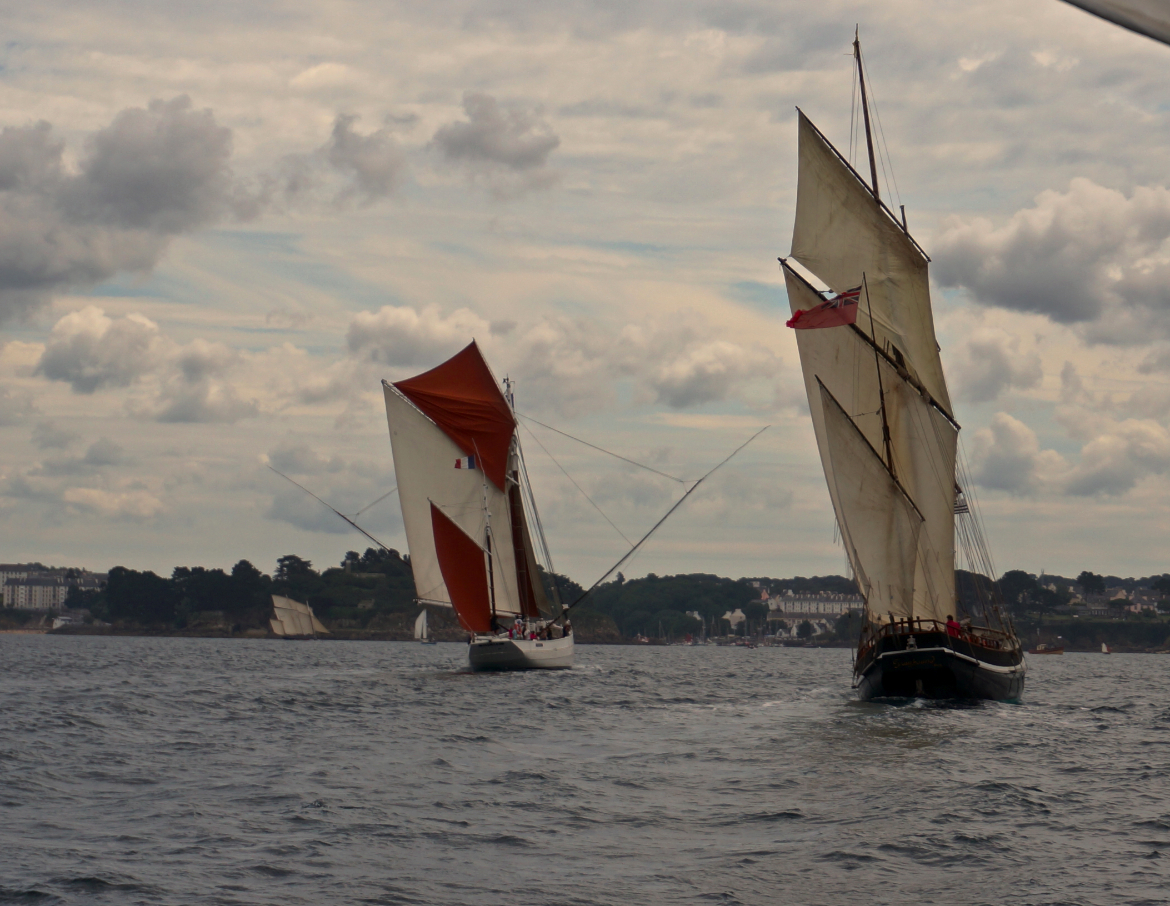 Trading with the wind, nothing more than an attractive concept ?

An old scow* is tied up in port, loaded with salt and spices that crossed the sea. Men are using only their arms to unload the precious cargo. No, this scene isn’t taking place in the 18th century, but right in the middle of the 2014 summer. 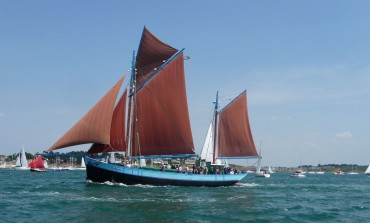 It is in Nantes that I meet up with the old Notre-Dame de Rumengol. This 22 metre long vessel is seductive with its black and blue hull and its burgundy sails. Waiting to be unloaded, it is proudly displaying its beauty.

Built in the Camaret shipyard in 1945, it cruised the French and English coasts for decades, carrying salt, wine, onions and even sand.

The crew invites me on board. From the deck, stairs descend to the ship’s hold. With a four metre high ceiling, it feels huge and can receive up to 120 tons of goods.

This is where sailors and passengers meet for their meals. Deep in the ship’s belly are also eight sleeping berths.

Since Notre-Dame de Rumengol left Brest two weeks ago, it has sailed from port to port, loading and unloading products that are then sold to an association dedicated to maintaining the small scale agriculture of the region, called the AMAP in French.

At each port of call, the scent of spices fills the air while men carry bags of salt or potatoes and even cases of wine. No less than 15 tons of merchandise will have been transported in this three-week long sailing journey.

I watch a group of journalists keeping not only a close eye on the crew operating the boat, but also on the employees of a relatively new company: TOWT which stands for “Trans Oceanic Wind Transport”. Founded in 2009 in France, the goal of the company is to transport goods using the wind as main power for the ships. The journey I embarked on is part of a yearly voyage around Brittany that is organized by TOWT, partly financed by the region. 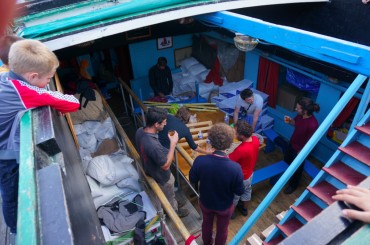 “Our operating fleet counts a dozen vessels and we were able to create several regular lines along the French coast, as well as transatlantic lines,” explains Diana Mesa, the co-director of TOWT.

“Prepare to cast off the bow !” yells the captain, followed by several other precise orders. A few bystanders observe the scene and take pictures. Slowly, the scow leaves its mooring place and prepares to follow the Loire river downstream. It is 7pm when we set sail, and the tide is still rising. The plan is to use the tide to effortlessly reach the river mouth in Saint-Nazaire.

Before 10am the next morning we must reach the Île-aux-Moines. Our bags of salt must be unloaded on the port of the largest island in the Gulf of Morbihan.

The deadline on top of the navigational constraints forces the crew to make use of the Baudoin to help the sail power, that is, the 120 hp engine of the ship.

One of the deckhands gives me some information on the device: “this type of engine burns eight litres of petrol for every hour of use”. TOWT asked the crew to take note for every hour that the Baudoin is in service. At the end of the campaign, the hours are totalled : 750 litres were consumed. 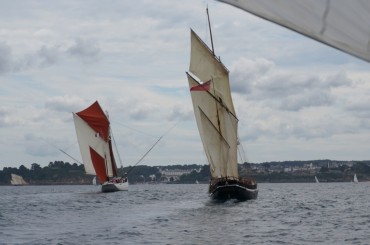 On board, everybody is going about their business. The journalists are interviewing, the people from TOWT are checking and labelling the cargo. All the products get a sticker “Transported by sail”. The sailors do their best to optimize the route in order to save time and fuel, and respect the timetable set by TOWT who is the charterer. The 18 stops that are planned for Le Notre-Dame de Rumengol must be made in less than 25 days.**

With a fixed gaze on the horizon, behind his sunglasses, Guillaume Legrand is the 30 year old founder of TOWT. “It’s a pity there isn’t more wind”, he regrets.

The boat’s schedule cannot be modified, and has to arrive at all the ports on time. Whatever the weather. The reality of life at sea is not always compatible with the economic reality. This is the way the world is spinning nowadays.

In the morning of the next day, we finally arrive in the Gulf of Morbihan.

At 8h30, three people are waiting for us at the wharf and are waving in our direction: they are the clients who ordered a few cases of wine and a ton of salt – island shop-owners who will be reselling the goods.

Every crew member knows his role perfectly and is so efficient that before 11am we are ready to set sail. On land, a shop owner is frustrated to see the vessel depart so quickly. He was looking forward to explaining to his customers why he chose this type of transport and show them the beautiful sailing boat. But we are awaited at the port of Lorient, 40 nautical miles away, which we must reach before 6pm.

Prior to every port of call, the well-oiled ritual takes place. The crew put the ropes away, the people of TOWT deploy a “Transport by sail” banner, and the clients get ready to collect their awaited goods. On most occasions, local newspaper reporters are here to cover the event, and take the traditional photograph. 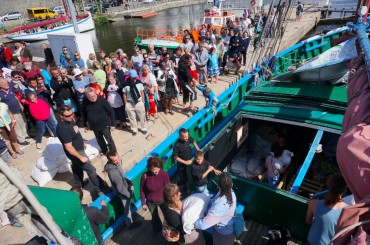 While watching the scene take place, I can’t help but wonder what part of this is authentic, and what part is marketed.

A few days later, I am given the opportunity to come back on board Le Notre-Dame de Rumengol, privately this time. On the trip from Aber Wrach to Morlaix, I will meet with Léa, a young member of the crew who studied political science. She is keen on sailing freight transport. “I am really interested in a project called Tres Hombres”, she tells me. “It is a 32 metre long schooner that seems to have come straight out of our distant past. This Dutch two-mast vessel is chartered by the company Faitransport, and occasionally by TOWT. It doesn’t have an engine, and has regularly crossed the Atlantic these past few years with products as well as passengers who pay to enjoy such a cruise”.

Zero compromise for these journeys, a concept that I can’t help comparing with the reality of the current coastal voyage I am witnessing.

I am dragged out of my daydream as we reach the town of Morlaix. We keep the Taureau castle on the port side and sail up the Morlaix river to reach the centre of town in the late afternoon.

The tranquillity, calm and contemplation of the sea journey are in stark contrast with our arrival. Two hundred people await on the wharf, not wanting to miss such an event.

Among the crowd, Stéphane Guichen is smiling. He is a salt producer in Pornic, and sells his product in Morlaix. Guichen made the personal choice of transporting his bags of salt by sea instead of road. “My first experience was in November 2013 when we transported four tons of salt on board the Biche, an old tuna boat, he later tells me. With this year’s cargo of the Notre-Dame de Rumengol, I have enough stock to last until 2015! It represents quite a lot of bags, so we arranged to raise an army of volunteers to help unload the salt via various associations such as the AMAPs and joint buying associations. It seems that the call was successful!” 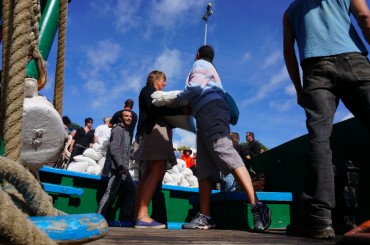 Music is playing, delicious crepes are being served, and amongst the friendly atmosphere a human chain is formed so that the bags of salt are passed from hand to hand.

Nine tons of goods transported by sail were unloaded by hand that day. The story made the front cover of the local newspaper.  As I read the article sipping a cup of coffee on the deck the next morning, I remember meeting the journalist the day before. The trouble is that the story depicts a perfect alternative to our actual way of moving stuff around. Finally the solution to the unavoidable collapse of fossil fuel stocks.

Unfortunately for these types of projects, we still live in a world where time equals money. Each minute saved means better business. All these floating museums that are used to transport freight with nothing more than the free power of the wind look pretty, but do they really have a future? Is it solely one of those buzzes, a well marketed media stunt, or is there more to it?

THE NEXT PART OF THIS DOSSIER WILL BE PUBLISHED ON THE 12TH OF SEPTEMBER 2014.