“Let me tell you what happened to me after a catastrophe that only you humans are capable of causing. I was about to be flattened by a ferry that covered my entire path. I was doomed.” 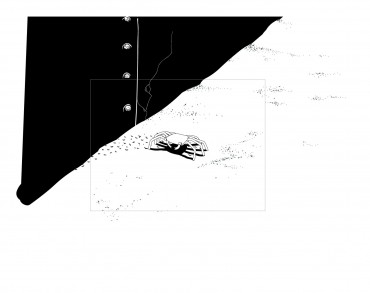 The scene takes place in Charente-Maritime. A large shadow is rapidly sinking, and threatening to crush a “square crab” who was minding its own business on the seafloor. Like all the other members of its species, this crab is unable to turn. It is sentenced to forever move sideways, and at this moment, to be squashed by a sinking boat. At the last second, to its own surprise, the little square crustacean is able to change direction and narrowly escapes a certain death.

“What had I done? I had turned of course, and I realised it had nothing to do with our shells. We weren’t turning because of our anatomy, but because we were too stupid!” explains the subversive crab.

The short film “The Crab Revolution” ends, and my cheeks still hurt.

“I wanted to know if crabs walked sideways because their anatomy prevented them to go forward, or if they just didn’t know that they could walk straight in front of them” explains Arthur de Pins, the director of the cartoon seen almost a million times on Youtube.

Some will easily spot the metaphor of our actual society, tamed by its many codes and norms. The tiny crabs in the black and white underwater world are the fable’s way to convey the message.

What about the destiny of the real crabs that have colonised our coasts for centuries? I decide to investigate the subject. 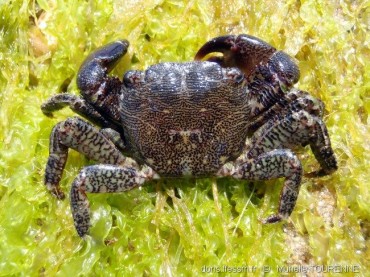 The scientific name of the heroes in the cartoon is Pachygrapsus marmoratus, better known as marbled crab.

“Because of their anatomy, crabs are unable to go anywhere but sideways. Their movements are conditioned by the articulations of their legs”, explains Pierre Noël, a carcinologist who is one of the crustacean specialists at the Natural History Museum in Paris.

“The soldier crabs that are found in the Southern Hemisphere are the only crabs that are able to move forward. Of course all the species of crab can turn around, and are capable of very rapid movement!” he adds, referring to the urban legend depicted in the cartoon.

I am told that more than 7 000 species of crabs have been identified, most of them live in a marine environment. But over time, some species have settled in fresh water lakes as well as on land.

“The Mediterranean Sea is where the Pachygrapsus marmoratus comes from, and nowadays you can find them almost everywhere in Europe, explains Pierre Noël. You may spot them in the inter-tidal zone of the Bay of Biscay or the Black Sea, where land is uncovered at low tide.”

I tell him the story of one of the crabs in the cartoon that assists helplessly to its legs being savagely pulled off by a kid.

“The population of marbled crabs takes a heavy toll in summer, because they are fairly easy to catch. Furthermore, it is difficult to assess the impact of fishing of their species because they aren’t consumed” adds the scientific.

I am starting to grow quite fond of these little creatures, and am worried about their plight. Pierre Noël feels my distress, and finds the comforting words: “Actually, the marbled crab is far from being endangered, and is thriving in most places.” I am relieved to learn that their fate is apparently in good claws.

In the inter-tidal zones of the Atlantic ocean, alongside the Pachygrapsus Marmoratus you’ll also find the Hemigrapsus Takanoi or brush-clawed shore crab, as well as the Hemigrapsus Sanguineus known as the Japanese-shore crab.

A biology professor at the University of Caen named Jean-Claude Dauvin took a closer look at these two foreign species.

“These species have been introduced, and we are therefore keeping a close eye on their invasion…”

I felt my blood boil as the image of my favourite beaches being invaded by an army of foreign crabs flashed before my eyes!

The ecologist explains: “These types of crabs have been imported by accident, most likely as larvae floating in the ballast waters of cargo boats. This happens quite often, and according to studies, one in every hundred species imported will manage to survive and eventually thrive. This ratio can also be applied to terrestrial animals”.

Let’s admit that an imported species is not as dangerous for the ecosystem as we would have thought. If its population gets out of control and is considered invasive, what then? 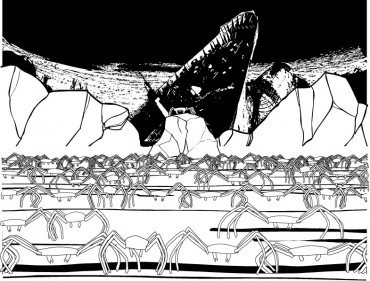 “Most species that are considered invasive follow an identical cycle: first, there is an expansion phase that reaches its maximum capacity, then comes the regression phase where we see a population stabilise. It is a classic phenomenon. At first, a new species colonises a healthy ecosystem where it doesn’t find its usual predators. After a prolific moment, it falls victim of pathologies, and when the species is abundant new predators start to recognise it as food. It takes between 50 and 100 years for a given population to decrease, and sometimes even disappear” explains Pierre Noël.

“Take the Chinese mitten crab for example, it was introduced in Europe at the beginning of the 20th century. Its population increased at a spectacular rate between the two world wars, and reached its peak in the 60’s at which point the species could be found all along the Atlantic and Mediterranean coast. Today, it has become rare to spot a single individual in France. Since I started to take care of the inventory of crustaceans on the French coasts in the 90’s, I have only spotted this species twice. It is definitively not considered invasive anymore.”

An introduced or invasive species is not necessarily a catastrophe. On the contrary, it can sometimes be positive for an ecosystem in certain circumstances.

“As to this day, we have never observed a species that made all the other disappear, explains Jean-Claude Dauvin. For example, the algae sargassum is considered invasive. But shrimps thrive on this algae, using it as a support”.

Okay. But nowadays, are there endangered species of crustaceans?

“Not to the point of extinction, answers Pierre Noël. Although some fishable stocks can be threatened. For example, the population of spider crab in Brittany is healthy, but they have almost completely disappeared from the Mediterranean because of overfishing and certain biological specifications. This species has spikes on its carapace, and is therefore easily caught by trawling ships. It also has a limited number of moults, and once it performed the last one, it becomes particularly vulnerable.” 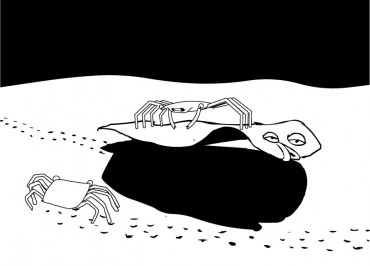 “Regular observations as well as inventories are paramount to evaluate the shifts in species. By analysing the results, we can observe a certain trend. For example, the Japanese shore crab can now be found in Wales, on the other side of the English Channel. Like many other species, it tends to move towards colder climates because of climate change. The rise in sea waters temperatures will probably influence a change in the fauna of the Northern Atlantic ocean, North of Iceland in the Norwegian archipelago of Svalbard… these region will see a rise in the population of species that are today in the rest of the Atlantic” explains Jean-Claude Dauvin.

Some crabs adapt by migrating thanks to human activities, and others manage to travel by their own means.

According to Pierre Noël, “we have to look at the big picture and consider the ecosystems as a whole. If the Great Barrier Reef in Australia was to disappear, it’s not only coral that will die, but all the crustaceans and the totality of species that live in this interdependent environment.”

Jean-Claude Dauvin concludes: “Today what’s important is the speed at which things are changing and whether species will be able to adapt in time to the rise in sea temperatures”.

I can’t help but to watch “The crab revolution” a second time after these interviews.

My mind wanders, and I imagine Arthur de Pins releasing the second part of the story that could by titled “The crabs migration to the Far North”… Which would this time be the metaphor of the ever growing population of climate refugees who need to escape their sinking homelands.

A crabby story this one, for sure. 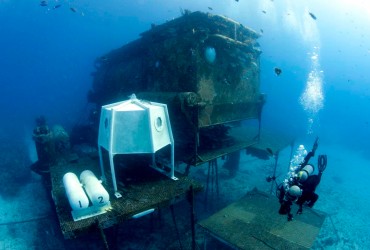