Drifting fortunes in the Caribbean

The sun is setting on the warm Caribbean Sea, and the sea breeze is dying along with the last pink and orange lights. On a zodiac not far away from a tiny island, a small group of scuba divers is getting ready for one of the best night dives in the world. Marine turtles, reef sharks and octopuses can be seen, although the real show only starts once the flashlights are turned off. It takes a few seconds for the eyes to adjust to complete darkness, but suddenly, here they are, everywhere. Hundreds of thousands of ostracods, the fireflies of the sea, each the size of a tomato seed and emitting a faint white light. At first, when a hand or a flipper disturbs the calm water, the “strings of pearls” fire up like sparkles. Soon, the dark sea is similar to outer space, and each diver is a spaceship navigating through an infinity of stars. 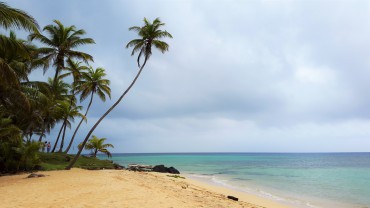 Back at the beach bar, the group debriefs around a cold beer. They exchange passionate comments, oblivious to the fact that, a decade ago, this bar didn’t even exist. In fact, most of the fancy houses and hotels now lining the island’s shore were recently built and are the byproduct of a very profitable local business. This little forgotten paradise is at the epicentre of the busiest drug corridor in the world. The consequences of the cocaine trade, good and bad, cannot be hidden, no matter how many palm trees are planted.

Located some 80 kilometers off Nicaragua’s East coast, the Corn Islands (Las Islas del Maíz) are two faint crumbs on the Caribbean map. Corn Island is the larger sister with its 10 square kilometers, and has roads, factories , a small airport and roughly 6’000 Spanish and English-Creole speaking inhabitants. The 1’200 locals of the smaller sibling, Little Corn Island, share less than three square kilometers with fruit trees and cows, where electricity is only available for a few hours every day. Don’t expect big resorts with concrete swimming pools. « Little Corn Island is getting more popular every year, says Adam Clarke, who has been living on the island for the past seven years and is now the manager of the Dolphin Dive shop. It often figures in lists such as top 10 unspoilt Caribbean Islands. »

The two sister islands were first put to use by pirates of the Caribbean in the 17th century, taking advantage of the remoteness to do what they did best. Later, a profitable sea island cotton production was set up by British colonialists, bringing in African slaves as cheap labor. The descendants who decided to stay after emancipation in the 19th century begun a far less labor intensive coconut production, and life remained hard yet peaceful. It was a little corner of paradise that they called home. 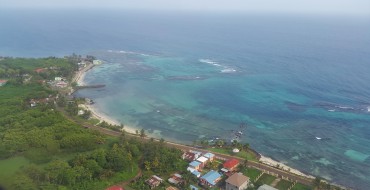 The first drastic change came in the 1960s, when the lobster market exploded. Everywhere in the United States of America, eating the large red crustacean’s exquisite white meat was, and still is, a sign of wealth. « When you talk to locals, says Adam Clarke, they will tell you stories about how if you were hungry 30 years ago, you waded into the water and just grabbed a lobster for dinner. » Nowadays, and because of intensive exploitation, it is hard to find a specimen of normal size. Nonetheless, fortunes were made almost overnight, and people from the mainland started moving to the two islands for a slice of the red lobster cake.

The second change happened in the early 1990s, and had much more dramatic consequences. Because of a unique combination of trade winds and sea currents, every floating object in the area tends to end up washed on the Mosquito Coast, as is called the Caribbean shore of mainland Nicaragua and of the Corn Islands. Suddenly, beachcombers starting finding “white lobsters”, the name given to “lost” bricks of pure cocaine. The popular drug is produced in southern countries such as Colombia, and is consumed in North America. Hundreds of tons of narcotics transit in the area every year. The stakes at play are beyond comprehension. 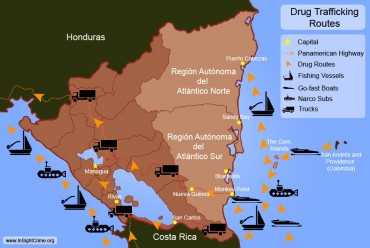 «Everything started in the early 1990s, explains Javier Melendez, a Nicaraguan that spent the last 20 years studying security issues and organised crime in Nicaragua and neighboring countries, and co-founder of the IEEPP, first think-tank focused on security issues in Central America. Keep in mind that there was a fierce civil war in Nicaragua in the 1980s. The Atlantic coast was full of guerilla and military, making it too dangerous for the Colombians to traffic the drug. Back then, the smugglers used to fly from Colombia or Panama directly to Miami. » On the phone, he explains that the transition from war to peace and democracy is consistent with the appearance of large amounts of cocaine in Nicaragua. The sea is the first responsible, because it naturally brought the narcotics to innocent lobster fishermen and coastal communities. These very poor people looked for ways to get rid of the valuable merchandise. Over time, an efficient network was built. « In the late 1990s, it wasn’t anymore poor people finding washep up cocaine and selling it to survive, says Javier. Local professional drug dealers were now working directly with the powerful Colombian cartels. »

Javier instructs me to take a map of Nicaragua. He points out that I am in fact looking at two countries, with two different types of inhabitants. The first he names the “Pacific people”, who own the capital, Managua, and all the state’s attention and funding. The second, the “Atlantic people”, have historically been ignored by the authorities, and are physically separated from the rest of the country. There are no direct roads from Managua to Bluefields, the South Atlantic Coast Autonomous Region’s capital. « The Atlantic side is half of Nicaragua, explains Javier, but up until a few years ago, no more than 10% of the population lived there. It’s a huge area with a complete lack of authorities and very poor and forgotten communities. An ideal combination for the narcotraffickers. »

Local people who own boats can help move the product. Small airstrips are built in the dense forest. Secret coves are used to refuel the boats and perform maintenance. Smugglers can peacefully grab a meal and rest for a while. Amounts of money unheard of started flooding the area, and not everybody knew how to swim. « With the years, explains Javier, the local communities started seeing the drug lords as leaders because they were bringing what the state had never been able to deliver to the Atlantic coast. There is now a huge problem of governance, because the Atlantic people see the authorities from Managua as outsiders whose aim is to oppress. »

This problem will not be resolved anytime soon, for a very simple reason. Despite the efforts of the authorities, and the pressure the USA puts on the Central America’s countries, there seems to be an infinite amount of cocaine coming from South America, and an infinite amount of North American nostrils ready to welcome it. 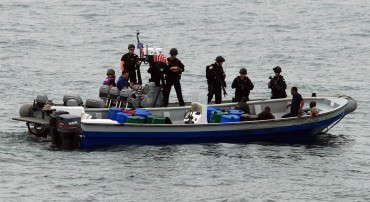 The market stays the same, but the logistics evolve. Unlike the 1990s, the Caribbean sea is now heavily patrolled by coast gards, American and Colombian NAVY boats, helicopters and planes. The narcotraffikers not only use planes or fishing boats but now build their own submarines (read Sea, Traffic and Drugs)! Still, the go-fast boats are the most used method to move their precious product North. If the crew of one of these narrow and powerful vessels realises they are about to get caught by the authorities, they immediately throw their cargo in the water. No evidence, no conviction. The plan is perfect. Indeed, the drugs are safely packaged to survive a salty water journey, and accomplices are warned to come pick up the floating or washed up cargo.

A hotel manager on Little Corn Island tells me a compelling story. He needed a large amount of wood to build his bungalows, and like everything on such a small island, the material had to be shipped by boat from mainland Nicaragua. He continues: « After a week with no news of the supplier, I decided to call him. He told me that the wood was ready on the boat, but it was momentarily impossible to find a crew. All the people with sailing knowledge were out at sea to retrieve a big cargo of drifting white lobster. » A much more profitable payday in perspective. 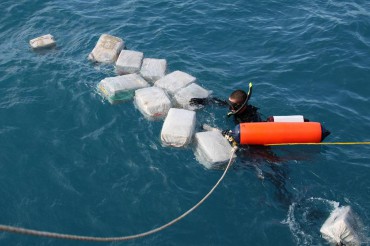 The hotel manager also tells me how a friend found one of these “gifts from god”, as the locals sometimes call them, washed on the beach of Little Corn Island. He had no clue what to do with 20 kilos of pure cocaine, so he took it back to the mainland and managed to get rid of it against 27’000.- dollars, a small fortune for Nicaragua. In Europe, assuming you could sell it in small amounts, this quantity of drugs would be worth millions of euros.

« All this money in such a poor region, regrets Javier Melendez, enables the drug lords to take control not only of the communities by distributing money and goods, but also of the police, the military, and the politicians through heavy corruption. There were several proven cases of drug traffickers who paid for political campaigns, which later assured them a total immunity against the national authorities. » In a 2014 report Javier helped to write, whose translated title is “Elites, Organised Crime and the Erosion of the Nicaraguan State”, the compelling case of Ted Hayman’s arrest is described. Haymann used to be a humble fisherman in Bluefield, and slowly became the most powerful man on the Mosquito Coast. His fortune in the drug business bought him the politicians, the police and the people. His arrest came as a shock, and local communities were reported protesting and rioting for his liberation. After his conviction, the different Central and North American agencies celebrated, but the drug lord was immediately replaced at the top of the hierarchy. 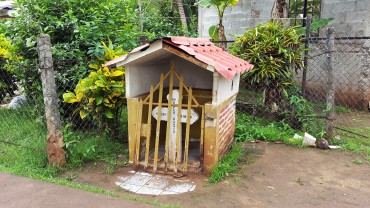 The third and latest revolution in the fate of Little Corn Island was also set in motion in the 1990s. As Nicaragua slowly became one of the safest countries in Central America, tourists from the whole world started flooding the lush forests and beautiful coasts the country has to offer. Word of mouth of unspoilt and peaceful little Caribbean islands spread like wild fire. But the violence associated with drug trafficking managed to tarnish this seemingly untouchable paradise. In 2008, and for the first time in the history of the islands, a drug-related murder was reported. Walter Hunter, a baseball player from the Corn Islands, was executed with nine bullets to the body, and one to the head. He had allegedly lost 35 kilos of narcotics, and the cartels decided to set an example. The message was crystal clear. « Even on a remote tropical island, we will find you. »

Although they have nothing to fear, visitors to the islands are still warned as they walk past Walter’s memorial next to the only port on Little Corn. It’s very easy to find cocaine and party all night in the hipster bars and nice hotels that border the beach. But don’t cross the line, or you risk becoming fish food, or worse, ostracod food. 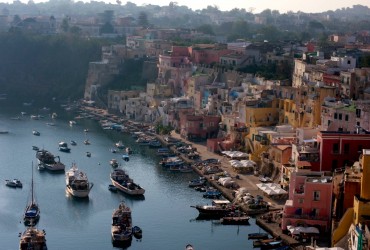