On paper Sandy Island is approximately 26.5km long and around 6km wide. This sliver of sand is supposedly located between Australia and France’s New Caledonia in the midst of the vast Pacific Ocean. Sound idyllic? Many would agree. Only trouble is that this tiny slice of Pacific paradise at 19°11’22.8” South and 159°56’43” East on the chart is no where to be seen. Sandy Island does not exist.

And yet in the serious Times Atlas of the World and on Google Earth there it is, a shard of an island, quite clearly documented.

Google Earth’s version of Sandy Island appears as a long dark crack in the ocean’s surface, but no scientific research vessel has ever located it. Could it be a classified defence project? 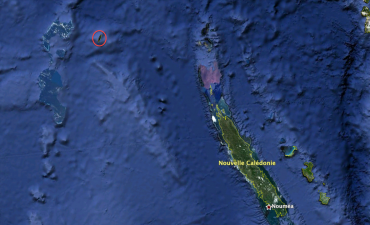 French scientists from the Navy’s Hydrographic and Oceanographic Service (SHOM) have a more rational explanation: “The satellite model is presenting an anomaly. It could be that there is an underwater volcano, but there is most definitely not an island,” stated SHOM geophysicist Marie-Françoise Lequentrec-Lalancette. “Or perhaps there was once a coral reef at this location and due to erosion it has collapsed. To learn more, the site would need to be explored by divers and as we stand today, the Australian scientists have not found a volcano beneath the surface, consequently from our point of view, there is nothing there!” she added.

The mystery of Sandy Island raises a more general question however. The modern technology at our disposal today leads us to believe that we know the surface of our planet intimately. Google Earth would have us think that every corner is known to man and has been photographed, analysed and mapped. This is far from the reality: “According to America’s National Oceanic and Atmospheric Administration (NOAA) we have accurate and in depth knowledge, that is to say, precise maps based on the findings from ships’ echo sounders, of 10% of the planet’s seas and oceans. That leaves 90% for which we have no precise data,” admits Pierre-Yves Dupuy, head of SHOM’s maritime document division.

Sandy Island is clear proof of this fact.

Secrets in the black eagles’ land

Exploring Albania’s coast, the OCEAN71 team has discovered the existence of a forgotten antique city. The take-over of this port by Julius Ceasar during the Civil War has been one of the key events that led him to absolute power. Swiss archaeologists are currently the first to study the site. Discover this exclusive documentary through the 4 episodes of the first season.