The first season of “Secrets in the Black Eagles’ Land” relates OCEAN 71 Magazine’s discovery of the Albanian coast, and more specifically the antique port of Orikum. This ancient city, situated in the South of Albania, was where a key episode in Jules Caesar’s life took place during the roman civil war. OCEAN 71 Magazine had the exclusivity to follow a team of Albanian and Swiss archaeologists who started excavations in this unique place in 2012. No other archaeologists ever came to this site due to the complete inaccessibility of the country during the 20th century while under communist regime.

Less than a week ago, back in Albania on board our sailing boat to shoot the next episodes of the series, we made a surprising discovery in the bay of Vlora. Right in front of the antique Orikum, three English warships were at anchor. 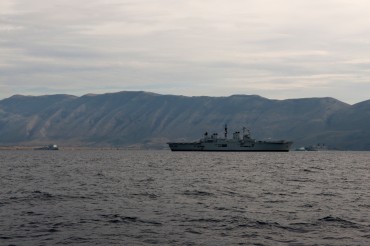 These monsters made of steel were the HMS Bulwark (the fleet’s flagship), the HMS Illustrious (helicopter and commando carrier) and the RFA Lyme Bay (designed to deploy the second wave of an amphibious assault).

Keeping in view the current events of the conflict in Syria, many battleships from different nationalities are being strategically placed in the waters of the Mediterranean. Although the British Parliament categorically refused a military action in Syria, is it possible that the English Navy Force is standing by in the area, ready to intervene?

“Cougar 13” takes place along the coast of Albania under the code name “Albanian Lion”. These past weeks, 10 warships of the Royal Navy as well as thousands of marines tested their abilities to deal with major events thousands of miles from Great Britain. This is the duty of the RFTG (Response Force Task Group).

Among the terrestrial and marine drills organised by the English were several landing operations simulating the arrival in a country where a civil insurrection or an ismalist extremist’s takeover is under way. Landing of Special Forces by sea or by helicopters, real bullets shooting, explosions of abandoned buildings on Albanian military territory… The Royal Navy chose scenarios that look quite real and actual.

However, with the English Parliament’s refusal of any implication in the Middle East, this little British armada is for now only an over-trained spectator…