The Atlantic and Mediterranean Bluefin tuna is no longer endangered. Great news. But now is not the time to take our eye off the situation. Greed has a way of sneaking back in and the lucrative nature of the Bluefin tuna, makes the risk of fraud in the industry very high.

Unsurprising, as incredibly some Mediterranean countries do not enforce the conservation measures required by the International Commission for the Conservation of Atlantic Tunas (ICCAT).

On the whole, the Bluefin tuna’s situation has improved over the last three years, so much so that the scientists monitoring the population are quietly optimistic. 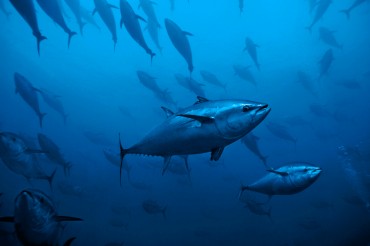 “We can confirm that compared with the assessment that we made in summer 2012, the situation is much better,” said Jean-Marc Fromentin, a Bluefin tuna researcher from France and a member of CSIS, the scientific committee that advises the ICCAT. “Although the bad weather last winter made aerial observation more challenging, the number of juveniles in nursery areas like the Gulf du Lion has increased for the past 4-5 years. That being said, we must remain vigilant, because even if the amount of tuna caught -legally and illegally- has reduced since 2009, the fishing capacity is still high ; cheating incentives do exist.”

For the 2013 fishing season, ICCAT has set a 13,400 tonne Bluefin tuna quota for the Eastern Atlantic and Mediterranean.

Traditionally Spanish, French and Italian fishermen have fished Bluefin tuna for generations. As a result, the European Union has secured just over half of the total fishing quota, obtaining a 7,548 tonne allowance. France’s reputation in the industry – particularly the fishermen from Sète – is highly respected; the 17-strong French fishing boats are considered the most talented in the Mediterranean.

“The ICCAT has declared the fishing season will run from 26 May to 24 June this year. It is good for us as the better the weather, the better the fishing,” explained Généreux Avallone, the latest in a long line of skippers from one of the biggest tuna fishing families in Sète. 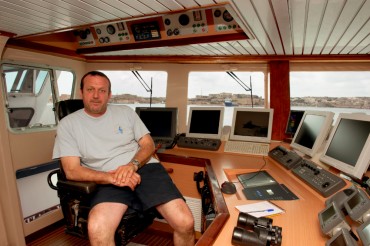 The better the weather, the warmer the water and Bluefin tuna need a water temperature of between 18-20 degrees to spawn. Until the Mediterranean reaches this temperature, the vast schools of tuna stay out in the Atlantic Ocean. In previous years the season ran from 15 May to 15 June and some fishermen were unable to reach their quota targets because of the weather and because the water temperature was too low; at least some are saying. Non-governmental organisations (NGOs) such as Greenpeace saw this as further proof that the species was on the brink of extinction.

“I am glad that the scientists recognise that the Bluefin tuna population is doing well,” said Généreux Avallone. “At sea we see a lot of them. Last year, with fewer quotas, we went as far as the coast of Egypt to find the large, more valuable tuna. There were so many fish that we reached our season quota in two days of fishing. We are happy that with less fishing over the last few years, the prices have been driven up. In 2010-2011 a fishfarmer would buy from us a kilogramme of Bluefin for 6-7 Euros; this year a kilogramme is 10 Euros. We don’t need to fish heavily to make a decent living. It is better this way.”

And yet, despite all the rules and ever-stringent regulations, the tuna fleet in some Mediterranean countries is cheating the system to stay afloat, economically.

“The numbers are simple,” explained Roberto Mieglo Bregazzi, former director of a Spanish tuna farm who today consults for the media and NGOs on the Bluefin tuna environment. “If you have a tuna fishing boat of 30 to 40 metres, you cannot fish just 20 to 30 tonnes of tuna and make money. The costs of crew, fuel and maintenance will mean that you are losing money! It’s simple mathematics. We estimate that French and Spanish tuna boats, which are the most costly, become profitable at 100 tonnes of Bluefin tuna. A Turkish tuna boat will be making a profit at 70-75 tonnes of fish. A North African tuna fishing boat becomes profitable at 50 tonnes. Anyone that nets less than 50 tonnes is bound to be tempted by fraud! This is why some countries have forced their fleet to pool the quota over a reduced number of boats. One thing is certain, a fishing boat skipper will never put to sea to loose money!” 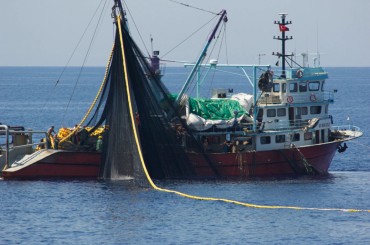 In the early 2000s, thinking they had identified the golden goose a number of Mediterranean countries built hundreds of tuna fishing boats. Fast-forward to today’s ICCAT quotas and tuna fishing boats find themselves with quotas far too small to make a profit.

This is the case in Tunisia, which has been going through a process of reconstruction since Spring 2011. The country announced that it has 21 tuna fishing boats cleared to fish for Bluefin tuna. Two thirds of this fleet has a quota of less than 50 tonnes.

Given that a net can catch 100 to 200 tonnes of tuna in one hit, it is very unlikely that a fisherman that catches more than his quota will throw the rest back, even though this is precisely what ICCAT stipulates.

As we go to press this season’s fraudulent fishing practices have already begun. A source that sails in north African waters year round told us that local tuna fishing boats have already started to catch tunas several weeks ago.

“It is a misnomer that there are no Bluefin tuna in the Mediterranean outside of their reproduction period,” explained Jean-Marc Fromentin a French scientist and specialist in the species. “Using electronic tagging we are studying sub populations of tuna that most probably remain in the Mediterranean year round.” 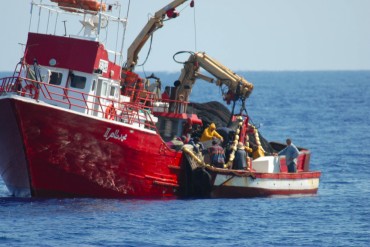 Another potential fraud hot spot is Libya. The Gulf of Sidra has always been known as a central breeding ground for the large Bluefin tuna. This year the country has announced an authorised tuna fishing fleet of 26 boats, but hasn’t allocated a quota to each boat as per the ICCAT recommendations. Libya has been granted 937 tonnes for 2013, which would be an average of 36 tonnes per boat. Once again the quantities are well below the profitable 50 tonne limit.

In Syria the situation is different. The country is at war. But despite this the ICCAT has granted the country a 33.58 tonne quota, the equivalent of 340,000 Euros, that officially no boat is authorised to catch.

Finally, Turkey is an interesting case. The country built the largest number of tuna fishing boats in the early 2000s and today has a fleet of 302 boats of between 25 and 54 metres long. Only nine boats are authorised to fish the 545 tonne quota and officially the 293 other boats will ‘assist’. Given the running costs ‘assisting’ doesn’t make much sense, making this a highly suspicious situation.

In 2011, the OCEAN71 Magazine team witnessed the ingenious ways that some of the Turkish fishermen exploit every avenue to make a profit. At the time we were exploring the Albanian coast at the entry to the Adriatic Sea. Scientists regard this area as a nursery for juvenile Bluefin tuna in the Mediterranean.

As we approached the Pasha Liman military base, the biggest in the country, we spotted a lone Turkish tuna fishing boat flying an Albanian ensign amongst the war ships and submarines. In 2011, Albania had several tonnes of quota, but officially, the country did not have a single authorisation to catch them. 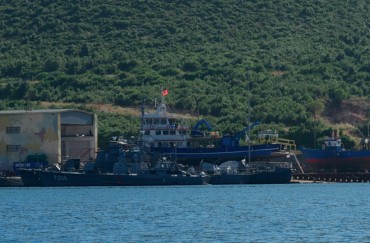 “The problem is that there is a double standard between the checks on European tuna fishing boats and the checks on other Mediterranean fishing boats,” said Généreux Avallone. “Why don’t the NGOs go and check on the respect of quotas in Turkey for example? I think they don’t, because the media is not interested in the story.”