A whale washing up on the beach is so commonplace these days that it is no longer newsworthy. Well newsworthy or not, it certainly gave the residents of Belle Ile a surprise on the 20 December when a 30-ton whale was spotted stranded off Kérel beach on the south side of the island. At 20 metres long, the rotting carcass had to be chopped up before it could be removed. 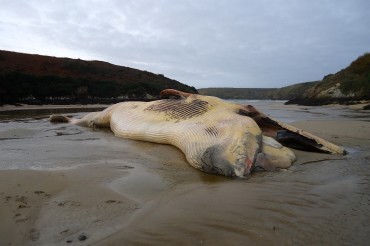 The cause and circumstances of its death are not yet known and are unlikely to ever be discovered as the creature was in an advanced state of decomposition by the time it was washed ashore. Given the size of the whale, it could be that it simply died of old age; some of these mammals have been known to live up to a hundred years old. Another theory based on the location of the dead whale, discovered in the busy commercial shipping waters off the coast of Brittany, could indicate that it was accidentally struck by a cargo ship or fishing trawler propeller when it surfaced to breath.

Another, lesser known, but equally deadly cause of death could have been internal bleeding. Whales and large marine mammals are known to suffer from internal bleeding as a result of exposure to high levels of underwater noise. The impact on their highly developed sense of hearing which enables them to navigate their habitat in the pitch dark and to seek food thousands of nautical miles away is immeasurable. 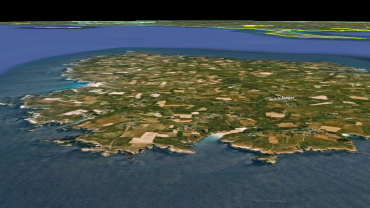 Mans activities below the surface of the oceans, such as military sonar, oil exploration air canons, the installation of offshore wind generators and – closer to the surface – commercial traffic, are having an adverse effect on these marine giants. These manmade sounds increasingly interfere with marine mammal sonar resulting in disorientation and in the worst cases, death by haemorrhage.

An involuntary crime that goes unheard.

The chemical tanker, YM Uranus, was hit by the bulk freighter Hanjin Richzad at the tip of the Brittany coast. OCEAN71 Magazine journalists found the crippled ship while it was towed. Exclusive images.