During the summer of 2016, OCEAN71 Magazine published an extensive investigation on the shark attacks in Réunion Island. All along this dossier written by our journalist Andy Guinand, the ingredients of what distinguishes a common story from a great story can be found: a faraway island bathed in tropical sun, victims savagely wounded or killed, men and women deeply hurt by a crisis that kindles passion and resurrect old tensions, and most of all, a predator from the depths of our oceans that crystallizes our terrors and fantasies.

This investigation that lasted several months between 2015 and 2016 is instructive in many ways: even if the many chapters do not answer all of the readers’ questions, our long and total immersion in the field allows the “shark crisis” to be put into perspective. Moreover, it brings up existential questions such as what is today’s man’s role and place in nature. It also painfully highlights our difficulty to think calmly and thoroughly, and our obvious misunderstanding of the complex mechanisms that rule the marine world.

In August 2016, we thought that everything was back on track in Réunion Island. More than a year had gone by without a single shark attack. Yet, on Saturday August the 27th, a bodyboarder was violently bitten, as he was surfing within the netting system of Boucan Canot. That morning, the lifesavers had noticed a hole in the nets, apparently large enough for a shark to swim through. As it is common in the aftermath of such a tragedy, the public authorities allowed a targeted fishing campaign to try and catch the culprit. Is it the best solution? No one really knows. 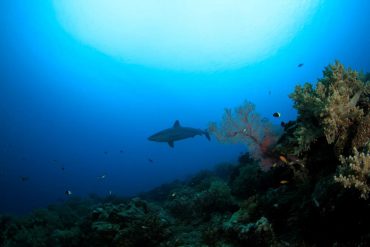 Evolution is a multi-million-year long process. A vast quantity of species have already disappeared from our planet in an everlasting and brutal war for survival. A battle we have been witnessing for a very short period of time. But the time scale seems to have suddenly shrunken. On the long line symbolizing the past millennia, mankind only needed a few seconds to develop tools to annihilate or save entire species of wild animals. Today, we seem to hold the power of life or death on a world that we don’t thoroughly understand. The collective belief has allowed it to become the norm. In the case of the shark crisis in Réunion Island, the reconsidering of this norm, the power we acquired to defend ourselves and that gave us the illusion that we are above the laws of nature, has become the problem. In reality, it all comes down to harnessing our fears from the unknown.

It automatically brings up the question as to whether we are capable of measured actions and considerations in the heat of a crisis. After reading this investigation on the “shark crisis”, it’s easier said than done. Nature conservationists, NGOs, fishermen, surfers and public authorities oppose each other sometimes violently, often safely behind computer screens and through hateful posts on social media that loudly resonate and deeply bury the essence of their message. In the end, it is a bitter realization to admit that nobody seems to be right.

I recently met with a biologist specialized in marine turtles. As I asked him, hypothetically, what our oceans would look like if these marine reptiles would disappear, he offered me a compelling metaphor that highlights just how far we are from actually knowing what is good for nature: “Take the wing of an airplane. You could probably unscrew dozens of bolts and rivets without risking a crash. Yet, if you take out three or four crucial rivets, the wing will disintegrate before your eyes. Today, our knowledge doesn’t allow us to point out this or that animal species as key rivets or not. In doubt, we tend to protect everything and anything. In fact, it’s a desperate attempt to maintain the status quo, to feel less guilty rather than to intelligently interact with the ecosystems.”

The moral of the shark crisis in Réunion Island isn’t about deciding if we could or should “cull” the problem, or if the ocean should remain “forbidden” to man – in any case, we are much too proud for that. It’s rather a matter of better knowing and understanding the awful lot of species of wild animals that share our habitat, especially if it’s a super-predator such as the shark.

The key, today, is knowledge. It remains to be seen if we are able to realize this soon enough.

Secrets in the black eagles’ land

Exploring Albania’s coast, the OCEAN71 team has discovered the existence of a forgotten antique city. The take-over of this port by Julius Ceasar during the Civil War has been one of the key events that led him to absolute power. Swiss archaeologists are currently the first to study the site. Discover this exclusive documentary through the 4 episodes of the first season.