A yachting family imagined from a crazy dream

For a few days, a crazy breeze has been blowing on the small exclusive port of Porto Cervo, in North-East Sardinia. A gigantic, nearly 100-meter white motor yacht, docked by the quay seems to block the entrance of the marina. But gawkers do not seem interested. A real irony for this plastic giant which normally acts as the ultimate head turner. This time the attraction is a group of very large sailing yachts (between 25 and 35 meters) immediately noticeable thanks to their metallic colored hulls. They get photographed like movie stars. They are the Wally. 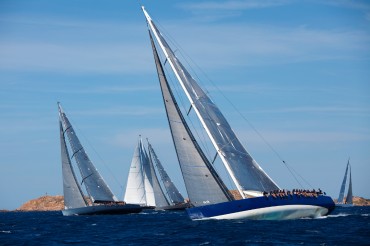 Connoisseurs focus on two of them: Saudade and Indio, the latest units to be launched. A major event! On the quay a man waves to one of the sailors on board. Seeing the man, the sailor waves back and exclaims: « Mr. Owen-Jones, please come aboard! » This sailor in his forties is Andrea Recordati, heir to an Italian family of pharmaceuticals magnates and owner of Indio. Lindsay Owen-Jones, former L’Oréal Chairman and CEO, is not stepping into the unknown. Magic Carpet 2, his Wally is docked two spaces further: « Congratulations Andrea, you can be proud, she is gorgeous! »

A rare moment, because new members of the Wally family do not pop up every day. Twenty-seven children. That’s it. Tiketitan, Open Season, J One, Y3K, or Tango, each yacht is a technological wonder which has required months, sometimes years in development. All are custom made, yet they bear a family likeness deriving from their general lines and exceptional craftsmanship. Nothing sticks out of the entirely flush teck decks. The portholes are fitted in the Burmese wood with millimetric precision. All the lines used to trim the sails are hidden to offer a perfectly clear view. All this of course is powered by electric motors controlled from several control panels located behind the helm wheels which offer a display of dozens of colored knobs and keys. As for metal parts, nothing or almost nothing can bend them; they are made out of titanium. 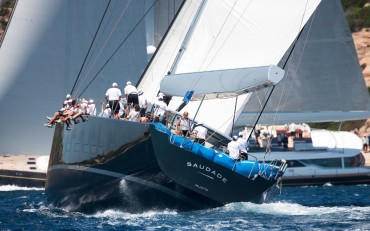 These sail yachts seem right out of a sci-fi novel. And so does the impressive motor yacht anchored outside the harbor hiding at the anchorage in the Sardinian rocks. The slender green silhouette is the 35-meter Wally Power (featured in Michael Bay’s 2005 film The Island) used as a residence by the Italian genius who fathered these wonders of the seas:  Luca Bassani.