“Are you heading to Capri or Ischia?” they ask on the dockside in Naples. “Neither, we’re going to Procida.” They hesitate. Look puzzled. Frown, and ask: “Where?” Smiling, you step aboard the ferry keeping Procida’s secret safe.

In stark contrast to its world famous neighbours, this tiny 3.6 km2 island has managed to keep its existence largely secret, avoiding the mass tourism that has swept the region for decades. Naples is renown for its history and remains, Capri for its luxury and pomp, and Ischia for its hot springs. Procida is something of a rarity; it has authenticity. 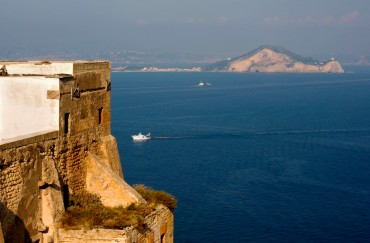 When you step off the ferry in Marina Grande 30 minutes later, it is as if you are stepping off a time machine that has rewound 40 or 50 years. There are no tour guides hollering for errant tourists, no big hotels or apartment blocks and not a single souvenir shop. The facades of the houses that frame the marina are painted shades of pastel: red, blue and yellow. They are weathered by the wind and worn by sea spray, which only serves to accentuate their old world charm. The port and the streets that lead off it are equally authentic.

A fifteen-minute walk through the narrow alleyways shaded from the blazing sun and you are in the Piazza dei Martiri, a good vantage point to get a feel for the island’s diversity and its unique geographical layout. On the left, perched atop a rocky outcrop, you will spot the Terra Murata, a fortress that was built by the Bourbons and which housed the ancient island prison. Through history this penitentiary has been home to successive Bourbon enemies, and more recently dissidents of the fascist regime, followed by the fascists themselves when the regime was defeated and later on, by some of the most powerful mafia barons of the region. Below it nestles La Corricella, a small fishing village, and a jewel of Italian architecture. To the right, La Chiaia, one of the island’s largest beaches, lies at the foot of towering cliffs. From this uninterrupted viewpoint, you can see all the way to the other end of the island by way of its interior, its hills, and its small villages and residential areas dotted with greenery. 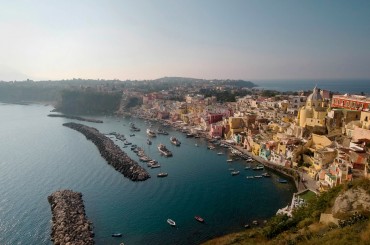 Tiny Procida is home to a staggering 11,000 people! This over population is actually one of its strengths, as it protects the island from the seasonal mass tourism that inhabitants of neighbouring islands have come to rely on. “To open a grand hotel, you need land and space,” said the previous owner of La Medusa, one of the oldest restaurants on the island, opened in 1954. “There isn’t any of that here. We live with what we have.”

This geographical restriction hasn’t prevented prospectors from swarming to the island over the years to look for a way to profit from the untapped beauty, which inspired author Alphonse de Lamartine to write his love story, Graziella, and later on Elsa Morante to write L’Ile d’Arturo. The artists that flock to Procida today are of the filmmaking variety, drawn by the island’s untouched 1950s and 60s décor. The islanders are fiercely proud of the fact that Il Postino by Michael Radford filmed in 1994 and The Talented Mr Ripley by Anthony Minghella in 1999 were shot on the island. 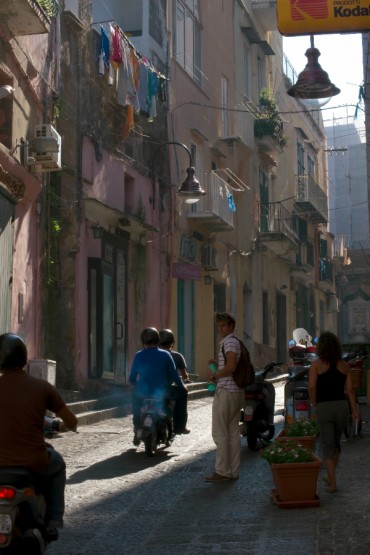 While the Procidanis are deeply attached to the feeling of being at home on the island, they have selflessly carved out a very exclusive niche in the tourism industry. The few hotels that do exist have a maximum capacity of 15 bedrooms, the price of a coffee will never inflate above €1 and it is very difficult to find a waiter that speaks fluent English. Doors to people’s homes are left wide open as everyone knows one another. Where would a burglar go anyway? In Procida, crime does not pay. And this precious simplicity has had an indirect and beneficial impact on the island in that the Camora mafia, so well-know and feared in Naples, has never managed to get a foothold because islanders have little time for luxury and wealth. The people of Procida live almost entirely on what they earn from the sea.