And what if man was responsible ?

Outside the vacation season, the shores of the Bassin d’Arcachon count 132,000 residents. But as early as June, when the dinophysis reappears, the population is mutiplied by four to reach nearly 500,000 persons! A population boom which the local water purification plants have a hard time accommodating. Another major polluter is the Smurfit Kappa plant which produces daily 1,400 metric tons of paper. Ideally located near the Landes natural park which spreads as far as the eye can see and is planted with millions of pine trees, it employs 450 persons. 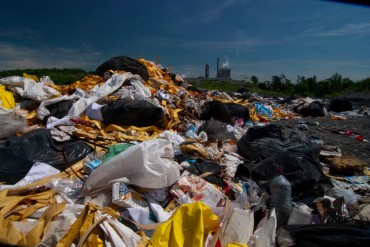 « What troubles us, explains Olivier Laban, president of the regional shell-fish farming section, is that the mice often die when there is no dinophysis in the water! » Last summer the oyster farmers, lacking arguments and having nowhere to turn to, decided to see for themselves and jumped the fence to enter the paper plant site. They found a giant open landfill as well as a retention pond containing pink water… located as close as a hundred meters from the Leyre, a river which runs into the Bassin d’Arcachon barely 2 kilometers downstream.

A year later, the OCEAN71 Magazine team has returned to the site to see if any changes were done by the plant employees. From the road that runs along the site, nothing can be seen. But passed a nice and grassed monticule, the reality is entirely different. The mountain of garbage is still visible, along with two large pink water ponds. While walking around and documenting the pollution sources, the smell is unbearable. It seems that any form of life is impossible within the pink water ponds. This water is most probably the result of the chemical treatment of paper production.

“More incredible still, the waste waters of the ten municipalities, half of those produced by Smurfit, part of those of the military base of Cazaux and the Arcachon hospital go through the collector of La Salie,” explains Olivier Laban. 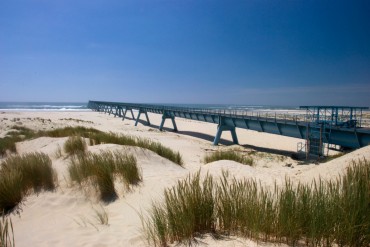 The giant sewer runs around the entire bay and opens on the ocean about three kilometers South of the entrance of the bay. Built in the 1970′s, the blue pipeline carries a daily 50,000 cubic meters of waters processed by the water purification plants of the area. Processed waters that still displays a more than questionable color. But, La Salie is located near the Banc d’Arguin natural reserve where the oysters are farmed. And the current (up to 15 km/h during spring and neap tides) pushes these waters toward the oyster beds of Arguin. «We don’t say that it is the direct cause of oyster poisoning, explains Jean-Michel Douet, but it is quite disturbing that every time, the oysters of the Banc d’Arguin are the first to be banned.» Especially since a sign set up in 2001 at the outlet of the pipeline prohibits swimming, fishing or the collection of shell-fish within a one kilometer radius… Olivier Laban adds another troubling fact: «We have commissioned water analyses which have showed traces of paracetamol and other molecules that go through the filters of the water purification plant!»