The Odyssey under our skin

We had a meeting with Ithaca’s former mayor, Spyros Arsenis, at the top of an old Venetian watchtower. Once up there, the view of the bay and Vathy’s port is breathtaking. We can easily imagine the canons sticking out of the wall, ready to open fire on the unfortunate xebecs or Ottoman galleys sailing towards the island. 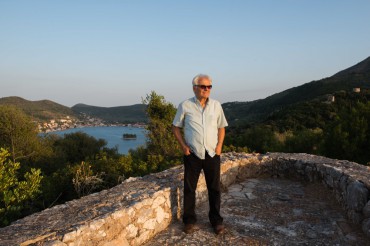 Sitting on the remains of a rampart, Spyros smiles at us and starts reciting a Greek poem. A day earlier, he had confessed his passion for ancient poetry. When he saw the look of surprise on our faces, he said: «I know exactly where tomorrow’s interview should take place.»

On top of the tower, Spyros sings, and we can unfortunately not understand all of it. Our short investigation didn’t give us enough time to become fluent in Greek. We are nonetheless transported by the flow of the lyrics. Here and there, we catch a word we think we recognize: «hymnos», «Odysseos», «nesos».

While we are listening to the poetry, we smell a pleasant Ithacan fragrance. It could be described as a unique olfactory mix of rosemary, bougainvillea, sea spray and goat smell. Our modern aoidos keeps reciting as the sun goes down, the orange light spreading over the hilly island. Magic is in the air. At the top of this tower, and before our very eyes, the legend comes to life once again. How could have we doubted, even for a minute, that Ithaca wasn’t Ithaca? 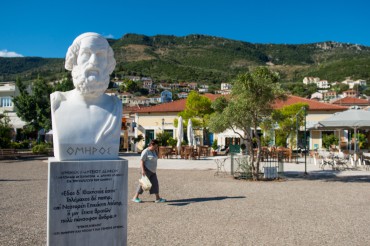 Later along the interview, Spyros Arsenis summarizes the various geographic, historic and archaeological «proofs» that should persuade even the most skeptical. His speech is well constructed and he recites it like a mantra: «From this lookout, we can keep an eye on the most important straits of the area. It’s the perfect place for the ruler of a maritime kingdom to settle. «School of Homer» is a promising archaeological site, and we must keep on investigating it. You can also see by yourselves that the island’s toponymy fits rather well with the description in Homer’s texts. In addition, Ithaca is the only place where we found dedication objects that mention Odysseus’ name. We even found money with his portrait, proof that he was worshipped here since Antiquity.»

On the course of our investigation, we heard or read these arguments many times, however we let him finish his speech. He didn’t realize he had convinced us since the beginning. Towards the end of the interview, we ask him the same question we asked all the people we met during our research. It’s late September 2015 in Greece, and national elections are being held while the country is deep in an economic and migratory crisis. «If Odysseus was here today, who do you think he would vote for?»

Spyros Arsenis answers without thinking twice. «He’s the most human of heroes in Greek mythology. Without a doubt, he would vote for a progressive party, whose political priority would be the solidarity between the men and women of Greece. He would definitely vote for Syriza.»

All along our exploration of the island, each time we asked the question, the person would automatically pinpoint characteristics of Odysseus that would fit his or her views. Whatever the political party. 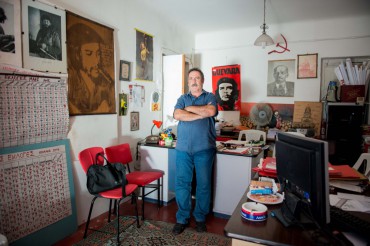 However, there is one person whose answer stood out. Nontas Mavrokefalos, the imposing secretary of the KKE, the communist party of Ithaca, associates Odysseus with a decaying and corrupt political system. «It’s a king that often lied to get himself out of difficult situations. He went warring across the country for the sole sake of profit. His economy was founded on plundering others. Much like all men of power, he was a conservative. I wouldn’t want him in my party», says Mavrokefalos, bantering, with a smiling mouth behind his thick moustache.

On modern Ithaca, the famous legend is omnipresent. On the streets, we meet Telemachus, Hector, Andromache, Cassandra, Penelope and of course Odysseus. Somebody speaks about Menelaus, but we can’t get in touch with any Agamemnon. Probably only because we can’t stay long enough. The locals of Ithaca defend their island tooth and nail in the face of controversy, especially when it concerns Odysseus’ kingdom. As we mention Bittlestone’s theory, we only receive frowning and crispation in answer.

Odysseus’ shadow is like a magical cloak that shields his fellow islanders from the outside threats. «Here, we live a simple life, explains Sotiris Couvaras in Greek, his wife translating for us. Some may say that we are poor, but they are wrong. We are very rich», he says after reading us a chapter of the Odyssey, one of his hands resting on the thick book. 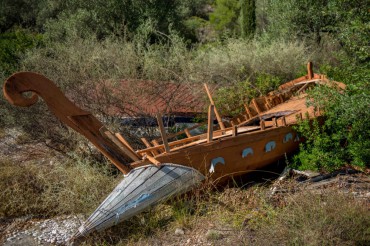 Nonetheless, King Odysseus was certainly not contemporary with the ancestors of today’s islanders. Too many millennia went by between the Mycenaeans and the modern Greek. Besides, Ithaca’s history is tumultuous, to say the least. The island changed hands many time. It was Greek before being Roman, then it went to the Byzantine, later to the Norman before belonging to important Italian families that never bothered to visit. The Ottoman empire later gained control, during which time the island was abandoned. Finally, the Venetians took it from the Sublime Porte at the beginning of the 16th century, and people started coming back.

Ithaca and Cephalonia have always been very strategic for commercial sailing: the people who control the islands also control the access to the Adriatic Sea. To this purpose, Venice started encouraging people to settle back on Ithaca. The new inhabitants were mostly Albanians then living on territories controlled by the Most Serene Republic of Venice, and were offered benefits in kind to move to the Ionian Islands

The plan worked, and a 19th century English census revealed that more than 15’000 people inhabited Ithaca, when it was virtually deserted only three centuries earlier. But once again, the land would be slowly abandoned: many Albanian descendants headed towards Europe or America in search of a brighter future. The ones who left kept in touch with those who stayed, even generations after the exile. There is now a philanthropic society in Australia run by Ithaca descendants, and they call themselves «The Ulysses». It seems that even half way across the world, nobody is truly able to forget the island. 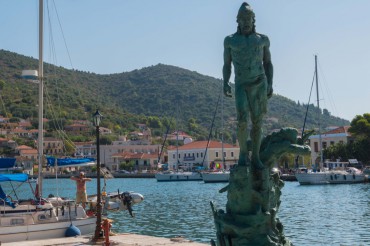 Could it be that The Odyssey influenced the islanders’ identity? «Without the shadow of a doubt» answers Filippos Lourantos, who was born and bred on Ithaca, and came back to live on his island after sailing the seven seas. «The people from here are sailors before being fishermen. I am one of many who works on commercial vessels around the globe.» Ithaca has long been a label for outstanding marine skills. But as the centuries went by, the sailors slowly stopped offering gifts to King Odysseus before setting sail. Not all traditions endure.

Unlike other historically significant places around the world, the island didn’t jump into the cultural tourism trap. Finding souvenir shops in Vathy to buy Odysseus stickers or a bust of Homer isn’t the easiest of tasks.

Our Homeric scholar David Bouvier confirms our feeling, he who often visited Ithaca: «The island could have easily become a touristic site, with a sort of Homeric Disneyland offering guided tours and exits through gift shops. But nothing of that sort has ever happened.»

In reality, the tourists are often Odyssey aficionados such as Jim Ottaway, an American we met in the port in Vathy. A former US press magnate, Jim now dedicates his well-earned retirement to a new translation of the Odyssey. 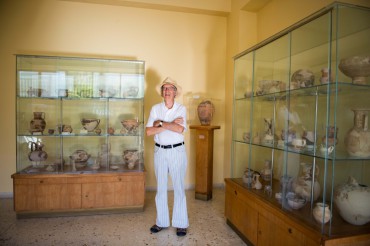 We meet him aboard a yacht called the Glaros. Jim is accompanying the owner and friend, Robert McCabe and his wife Dina. Our conversation on the deck revolves around their work: «I am well aware that there are already numerous translations, most of them of good quality. To be honest, I began translating the Odyssey just for the fun of it. I am about to start book XIII which explains how Odysseus arrived on Ithaca. It’s a magical thing to work on this topic while being physically here on the same island.» His eyes sparkle with passion.

Spyros Arsenis recites verses at the top of a watchtower. The Couvaras family is the memory keeper of the archaeological findings in the Stavros museum. Jim Crawshaw follows with Robert Bittlestone’s core sampling project on Cephalonia. David Bouvier works on the genetics of Homeric texts. Jim Ottaway translates his very own Odyssey. They are all, in their unique way, searching for their Ithaca. We still need to find ours. And we are making progress. We have a compass to guide us, in the form of Constantin Cavafy’s poem, translated here by Edmund Keeley and Philip Sherrard. We offer it to you, dear reader, so that you might also find, if you wish, your own Ithaca:

As you set out for Ithaca
Hope the voyage is a long one,
Full of adventure, full of discovery.
Laistrygonians and Cyclops,
Angry Poseidon—don’t be afraid of them:
You’ll never find things like that on your way
As long as you keep your thoughts raised high,
As long as a rare excitement
Stirs your spirit and your body.
Laistrygonians and Cyclops,
Wild Poseidon—you won’t encounter them
Unless you bring them along inside your soul,
Unless your soul sets them up in front of you.

Hope the voyage is a long one.
May there be many a summer morning when,
With what pleasure, what joy,
You come into harbors seen for the first time;
May you stop at Phoenician trading stations
To buy fine things,
Mother of pearl and coral, amber and ebony,
Sensual perfume of every kind—
As many sensual perfumes as you can;
And may you visit many Egyptian cities
To gather stores of knowledge from their scholars.

Keep Ithaca always in your mind.
Arriving there is what you are destined for.
But do not hurry the journey at all.
Better if it lasts for years,
So you are old by the time you reach the island,
Wealthy with all you have gained on the way,
Not expecting Ithaca to make you rich.

Ithaca gave you the marvelous journey.
Without her you would not have set out.
She has nothing left to give you now.

And if you find her poor, Ithaca won’t have fooled you.
Wise as you will have become, so full of experience,
You will have understood by then what these Ithacas mean.