Historians can date the first sailing freight transport back to the 16th century. From then on traditions slowly evolved throughout the decades until they were brutally revolutionised. The first big game changer was, obviously, the discovery of the combustion engine. In 1950, the metallic container was invented and nothing would ever be the same again in the cargo world.

With increased sea traffic, regulations made their appearance to guarantee a certain safety at sea. In 1960, the SOLAS treaty (International Convention for the Safety of Life at Sea) was signed. Since then, safety rules have evolved with the evolution of trade ships.

Currently, a container ship can transport up to 18’000 metallic boxes. Each of them is allowed 27 tons of goods maximum. These numbers aren’t exactly in favour of the fleet of sailing boats. Nonetheless, they have to adapt to these regulations written for giants of steel rather than wooden “Tom Thumbs”.

Stellio Pomaré is a vessels security inspector at Brest’s centre for marine affairs. He explains that “in order to transport freight, a boat has to follow strict regulations to be a called a carrying vessel, such as a container ship. To this day, most sailing freight transporters are either classic sailing yachts or brand new vessels. In both cases the charterers are often unable to afford the expensive technical expertise.”

The members of the “Un air de fret” association have recently been confronted with administrative and legislative difficulties. “Our biggest problem is definitely the import and export of transatlantic products to and from big cities, explains Pauline Weidmann. We have to transit through forwarders to declare our imports. But they are usually not interested in such unprofitable small quantities. It’s safe to say we are sometimes in an akward position with customs.”

Regulations not only impact transported goods, but the ships themselves. Strictly speaking, the safety and technical standards should be identical on a 30 metre wooden boat as on a 300 metre steel ship. Currently, this is almost impossible.

“We presently find ourselves in a grey area. Nobody knows what to do with us,” Pauline Weidmann adds.

For the moment in France, this system works on derogations. “Today we take every request on a case by case basis. If the classic yacht has a history of freight transport, we accept the request according to the technical capacity even if the regulations aren’t strictly applied,” Stellio Pomaré explains.

There is a effort in France to bring a legal reform, but it takes time and a strong political will.

One ship’s name keeps coming back in the discussions: Tres Hombres, which is flagged in Sierra Leone. “As the ship has no engine, it takes advantage of a special status”, explains Stellio Pomaré. The charterer is hence able to transport freight as well as passengers willing to experience such a voyage, giving full time work to three sailors.

When a ship flies the French flag, it has to make a choice. It can either transport goods, or paying passengers. Both at the same time are not strictly possible.

Such rules are a real threat to the emerging business of sailing freight transport. In this small market, survival is sometimes a matter of battle.

“In this sector, TOWT is currently the most active actor pushing to bring a change in regulations” Stellio Pomaré of the Marine Affaires tells me. I told the director of the company that, I think, he is not as political as he should be to be heard in Paris.

In the meantime, what future can be expected for the sailing freight transport business?

I sought an external view on the subject, and the director of ISEMA (Marine Economy Institute in Nantes), Paul Tourret, answered my questions:

“The biggest problem of the 21st century is the cost of fuel. Today sailing freight transport seems to answer the need of only a few daydreamers. They are nonetheless pioneering new marine routes. Large transport corporations are getting interested in developing vessels equivalent to current container ships but able to travel across the Atlantic using nothing but the wind’s energy. Japanese companies are leading the way.” 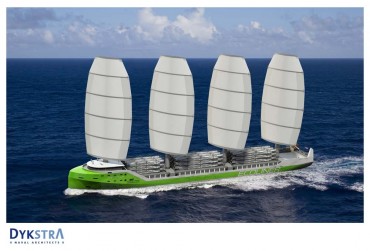 Closer to us, the Dutch from the company Fairtransport have a new project in the pipeline. It is called Ecoliner: A hybrid container ship with automated sails, built to cross the world’s oceans.

“I can’t help but wonder if we will still need such large means of transport in the future, adds Paul Tourret. It is possible that we will have to come back to a simpler and smaller system, shaped by the cost of energy. We will still transport goods on large distances but they will be expensive and precious, and there’ll definitely be fewer large ships. This is when sailing freight transport, as we witness it emerging today, will make most sense.”

Some see a cleaner alternative in  this world of cargo transported by sails, and others a more humane way to trade.

“These people are very motivated, they wish to launch a less costly way of doing things. Unfortunately they are confronted with a system that is clearly focused on financial productivity,” Stellio Pomaré concludes.

As we see it, a progress in regulations, in the technical aspects and in the economics won’t be enough. For this system to truly work, the winds of change will need to blow hard on our whole approach of the world of trade. And it’s not a small breeze that will move such a big fish …