The Antarctic krill is the largest biomass on earth. It is the food basis for most of the animals living on the white continent. For the past five years, new hunters have appeared. A dozen of factory fishing vessel travel to the far side of the planet to quietly capture what could become a gold mine.

A tiny crustacean that could change the world

The Antarctic krill or Euphausia Superba is a tiny translucent shrimp looking crustacean. Adults measure between five and seven centimetres and live in swarms of several thousand per cubic metre. Krill reproduces very quickly and in vast quantities around the Antarctic continent. These little crustaceans represent the largest biomass on the planet. 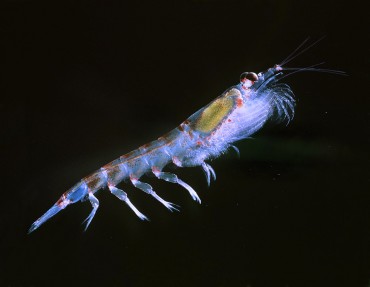 Scientific research dating back to the 80s estimates the biomass at somewhere between 125 and 735 million tonnes – very approximate and somewhat unreliable data, but despite more recent technology and methods, it remains extremely difficult to obtain more precise information given the size of the area and the fact that the swarms move with the currents at depths that vary between 0 and 200 metres. We know that the krill biomass is enormous, but we don’t know exactly how enormous.

Krill is a critical part of the Antarctic ecosystem as it is the staple diet of all Southern Ocean dwellers: whales, seals, leopard seals, penguins, albatross and more. Seals consume around 60 million tonnes of krill annually, while the estimated amount consumed by whales is around 50 million.

Some scientists credit the diminutive custacean with even greater assets. They believe that krill plays an important part in climate control. In feeding on the phytoplankton that absorbs CO2 accumulated on the surface of the water, krill transfers the element through its excrement thousands of metres beneath the surface. Unfortunately once again a lack of data on the species means we know little about the global impact of this natural process.