We are in 1996, at the Plymouth Marine Laboratory in southwest England. The team of scientist are dumbfounded over their analysis. For several days, they have been studying samples that were encapsulated some 9’500 kilometres away, and the results are astonishing. They have to run the tests several times to be sure. But after some time, they have to admit it. They are looking at one of the cleanest sea water ever to be tested. 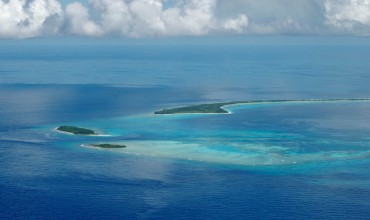 “Pristine” is the adjective that they will use to qualify their findings, but it goes beyond that. The levels of most contaminants are so low, they’re comparable to what can be observed in the cold waters of the Antarctic, about as far as it gets from civilisation. But the sea water in the little glass vials is normally at 27° C, all year round, which is a nice tropical temperature. The samples all came from the vicinity of Diego Garcia, the largest island of the Chagos Archipelago, only 7 degrees south of the equator, right in the middle of the Indian Ocean.

Shaped like a melted horseshoe, with its only pass facing North, Diego Garcia is one of the only three islands of the archipelago that are big enough to be inhabited. The 52 other patches of land that hardly make it above the sea level seem extremely fragile in the face of climate change. A water rise of a few meters would most likely submerge some 95% of the archipelago. But today, and above the water, it is a peaceful, postcard-perfect scenery.

Below the surface, however, it is far from peaceful. Indeed, the Great Chagos Bank, which is the largest atoll structure in the world, is a window into the past. It shows us a forgotten time when the oceans were literally teaming with life.

« There were so many fish there, Tom Lawler, a yachtsman that was allowed to anchor his boat in the northern islands on his way from Malaysia to Madagascar, told me. We would watch the water boiling around the anchorage with tuna schooling the bait fish up and then exploding up three to five feet in the air. At dinner time, we would bait a hook and it would never hit the bottom before a fish would grab it. We would pull up a four pound red snapper and put the rod away until we needed another meal. » 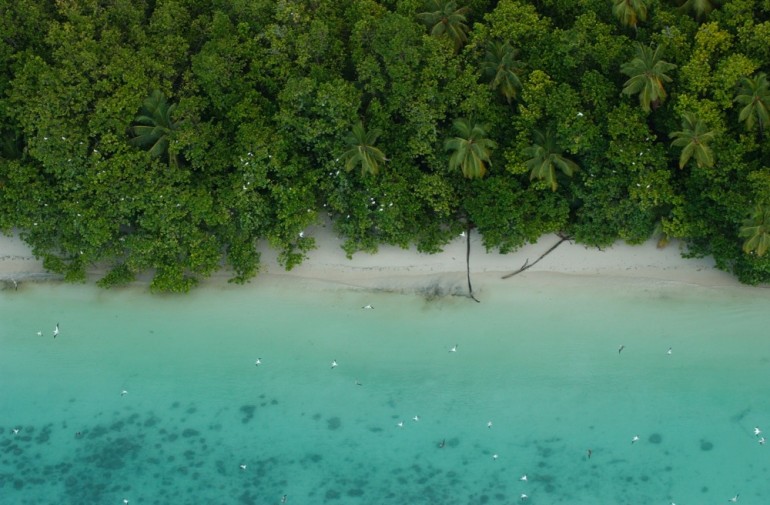 Tom and his family are part of a very small group of people that were able to see this isolated place with their own eyes. Since the 1970’s, the Chagos Archipelago is one of the last places on earth only accessible by private boat.

« There is no tourism in the Chagos, confirms Elisabeth Whitebread, a trustee of the Chagos Conservation Trust, a charity dedicated to the conservation, history and science of the archipelago. Although there is a limited amount of private yacht that is allowed in the northern islands, we consider it as a respite stop across the Indian Ocean. Visiting yachts can only stay for a limited period of time and they pay a high permit fee. This way, we can ensure that the place stays special. »

« We got a permit to stay 30 days, adds Tom Lawler, and we stayed just under that time. First we went to Peros Banhos, one of the northern atolls, and were almost immediately approached by the patrol boat. They were there to check the name of our yacht on their approved list, and we were allowed to proceed. We anchored down near Ile Du Coin based on the south east winds. It’s really a paradise. » 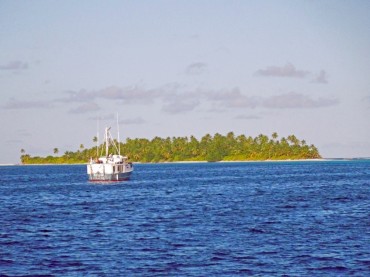 A paradise with a very long set of rules. Fishing for personal use is allowed, but only with a fishing rod. Spearfishing is strictly prohibited, as well as scuba diving, while snorkelling is allowed. Visiting the different islands is permitted, and there are even walking trails. But the modern Crusoes are asked to touch only with their eyes, and not remove even a coconut. « We knew one Canadian boat that caught and ate coconut crabs, a terrestrial type of hermit crab, which is specifically forbidden, Lawler tells me. They then wrote about it on their blog. The next day, they were approached by the BIOT patrol boat, and were kicked out. »

BIOT stands for British Indian Ocean Territory, which means these tiny tropical islands belong to her Majesty the Queen. But the control of the archipelago changed hands many times in its short but intense history.

It is believed that the Portuguese, while sailing the Indian Ocean towards India at the beginning of the 16th century, were the very first sailors to spot the archipelago. The islands were then completely free of men, and no traces of indigenous settlement were ever found. It is also unclear where the name Diego Garcia comes from. During the 18th century, the archipelago is already considered a highly strategic stopover for the numerous boats that are sailing from Europe on their route to India and its famous spices. The control of Diego Garcia was disputed for decades between the French and the British, the first nations to foresee its value.

Being downright isolated, the Chagos Archipelago was at first chosen as the perfect deportation place for the sick and contagious of Mauritius, an island claimed by France and located more than 2’000 kilometres away. The leper colony became the very first permanent settlement. It was then transformed into a profitable coconut plantation, run by French owners who exploited slaves from Mozambique and Madagascar. 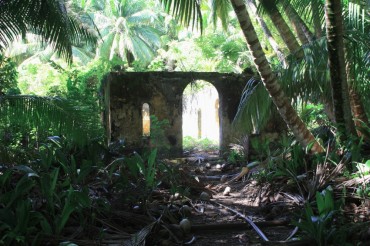 Back in Europe at the beginning of the 19th century, war was raging between France and the Sixth Coalition, and its outcome influenced Chagos’ destiny. Napoleon lost his final battle in 1814, and the Treaty of Paris was signed so that the winners could claim their prizes. Mauritius and its “Lesser Dependencies”, which included the Chagos Archipelago, were given to England. The new British owners of the coconut plantations took up their duties and intensified the copra production to meet the world’s need of coconut oil.

In his 2013 essay “A Brief History of the Ilois Experience”, Ted Morris writes:  « Great Britain outlawed slavery throughout the Empire in August 1834, requiring a six year period of apprenticeship to the former masters during which time the former slaves were to be instructed in the skills and knowledge needed by a free person. On the Chagos, individual freed slaves undoubtedly migrated out of the Chagos following final emancipation in 1840, but there is little question that some stayed or returned, thus becoming the ancestors of the agricultural contract workers who later called the Chagos home. »

Third World wages and in-kind services were the rewards for hard physical labour, with very little aid from machinery. Life on the heavenly islands wasn’t easy. But a peaceful creole culture was born, with a matriarchal society. No doubt the remaining of the leper colony, where men’s chances of survival are much lower than women’s.

However, events that unfolded thousands of kilometres away were once again about to change the course of Diego Garcia’s destiny. Another war -very cold – between the two most powerful countries on the planet was about to influence the Antarctic of the tropics.