The hunt for a new venue started with a vengeance. Australia? Good weather in February, but no infrastructure. To try to get something going in four months would have been madness. In the end the New York Supreme Court put a stop to the billionaires’ battle and imposed Valencia, Spain, for the best of three races in February 2010.

The 32nd America’s Cup Port had been lying dormant since July 2007, it was the ideal venue: the team bases were still functional. The only trouble was the weather. Winter conditions in the Mediterranean were far from appropriate for these super light gigantic multihulls that sail at two to three times the wind speed when flying a hull. 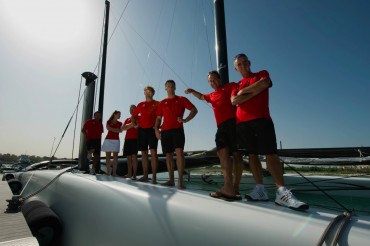 These technological marvels cost both teams in excess of 150 million dollars to design and build, but just the boat was not enough, there was an arms race for the cream of the world’s multihull sailing talent, mainly from France.

Frank Cammas was quickly swept up by the American team as a consultant before he left to race the Jules Verne trophy, while Alinghi hired Loick Peyron, Frank Proffit and Alain Gautier in 2009. This group of experts soon became known as the “Crazy Frenchies” by the majority Anglo-Saxon teams, but they were in their element: “It’s incredible how refined these boats are,” said Loïck Peyron a few months before the Cup. “There are 10 times more sensors on the boat than on a Formula 1 car and the computers tell us almost exactly how far we can push things. It is in stark contrast to how we do this in France, where with our budgets, we analyse our performance ‘au feeling’!”

By this point, Bertarelli had pretty much decided that if Alinghi was to win the 33rd edition, then multihulls were in the Cup to stay. “I believe that multihulls have a future in the Cup,” said Loick Peyron. “Unlike the monohulls that were in the Cup for so long, these multihulls that seem so pioneering today will be surpassed in a few years, no more.” 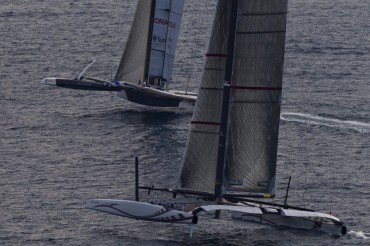 One can’t help but wonder whether Ellison knew where his attempt to destabilise Bertarelli would lead. For a moment back then, the US team was declaring itself to be the defender of the traditions of the America’s Cup and was promising to return the event to normal if it won the best of three Deed of Gift match which it forced through the New York Supreme Court. How far will Ellison go now to keep the Cup?