When isolation rhymes with protection

A month later. End of September 2011. “I think you should better come and have a look at this,” says Philippe, an OCEAN71 Magazine photographer, who having resurfaced is hanging off the back of the boat. “I think you will like it!” He has just found something exceptional, something that far exceeds what we have observed since the beginning of September when the rest of the team joined me to explore the region’s seabed. 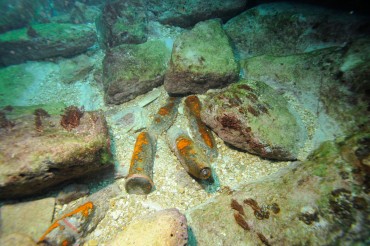 I have wanted to test a theory since arriving in Albania and now is my chance: would the seabed of a region closed to the rest of the world for almost a century, untouched by industrialism and tourism, remain unspoilt? My instincts tell me that we should be able to discover what the Mediterranean sea once would have looked like and, just a few forays around Saranda later, my theory was confirmed. Despite recent tourism we are the only boat for miles, a world away, yet only a few kilometres from thousands of cruising boats jostling for a mooring along the Greek coastline.

Below the surface of the crystal clear water we discover areas that look like marine nature reserves with acres of seaweed and sea sponges stretching as far as the eye can see. We find a species of coral in the rock crevices and the underwater ridges and ravines abound with aquatic vegetation and thousands of different varieties of fish and shellfish. Scattered artillery shells and detonated mines provide the only sinister reminder of the country’s military past.

To put our theory and recent discoveries to the test, we head north along the vertiginous coastline towards Porto Palermo, situated halfway between Saranda and Vlora, two major southern coastal cities. On the chart it looks like a large sheltered bay, a natural harbour, and promises to be a good place to spend the night.

We arrive towards the end of the day and navigate between two headlands into a bay that is guarded by an Ottoman fortress built by Ali Pacha, governor of the region during the Turkish occupation. Behind the fortress we find a spacious, if slightly dilapidated concrete T-dock and aside from this eyesore, the place is extraordinarily beautiful: we are surrounded by mountains adorned with a few tufts of yellow grass and old olive trees that have withstood the test of time.

As the evening draws in, a wooden trawler ties up alongside and people appear out of nowhere to do their shopping. Fifteen cases of seafood later, the trawler is ready to set off again at dawn. Before it does, Philippe seizes the opportunity to learn something more about this country and strikes up a conversation with Agron, the skipper of the fishing boat, in faltering Italian. He joins us aboard our boat and stays long into the night. We learn that the fishing is abundant and more interestingly – a few glasses of Raki later – that in a particular area, he occasionally finds something other than fish in his nets. He lowers his voice and leans in as if he is worried of being overheard: “I also pull up Roman amphorae!”