At midday, the temperature is around 30°C in the small coastal village of Beyin, in Ghana. The few tourists that walk around are mostly reddish and soaked in sweat. Completely knocked out by the heat, they are waiting for the departure to Nzulezu, a picturesque little village made of stilts and platforms. The mood has somewhat changed over the past few months in Beyin, and the usually throaty laughs of the local population are increasingly rare. Beyin is worried and its people tormented. On the higher part of the shoreline, a thick layer of decomposing seaweed is rotting in the sun. The smell is too harsh to bear. The once white sand and blue sea have turned brown, offering a miserable sight for the tourists. More importantly, it’s a disaster for the local fishermen. «Our nets keep filling up with the floating seaweed. We can’t catch any fish. We haven’t gone out at sea in the past three months», explains one of the fishermen. Fish is the village’s main resource. The local families are suffering from the loss of income, and some are going quite hungry. This situation in Beyin mirrors what has been happening in many other villages along the African coast. Since the winter of 2011, the overwhelming seaweed keeps coming back year after year, as if the Gulf of Guinea had been cursed. 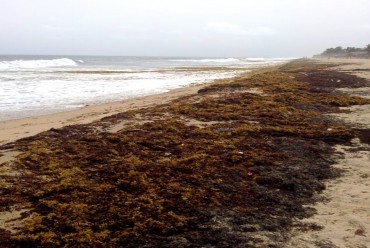 Yacouba Sankaré, researcher at the oceanographic center in Abidjan, paints a sad picture: «We have been collecting and observing Sargassum in the Gulf of Guinea since the 1990s. But since 2011, we have noticed a peak in abundance. Locally, we have always had fixed species of Sargassum: The S. Vulgare for example. But the floating Sargassum such as S. Natans and S. Fluitans come from far away. The entire coast is threatened, from the South of Morocco all the way to Nigeria. It’s undeniable that the fishing and tourism industry are suffering, but we are also worried about the impact these massive amounts of seaweed have on the ecosystems».

On the other side of the Atlantic, people are coming to the same conclusions. Like in Africa, it all seems to have started in 2011. Off the coast of some Caribbean islands, huge masses of Sargassum that can reach 400 kilometers long for 30 kilometers wide are drifting with the ocean currents. When they get closer to the shore, the winds separate the seaweed in smaller patches that are still several hundred meters long. They are then able to infiltrate everywhere, the bays, the beaches, the mangroves and the ports. When they arrive with the wind, the turquoise water quickly turns into a brown soup, to the great dismay of the locals who witness the disfigurement of their postcard-perfect beaches. The touristic infrastructures are the first to suffer, with hotels closing down and people moving out. The population, their local economy and the surrounding ecosystems: those who are facing the open ocean are inevitably in deep trouble. 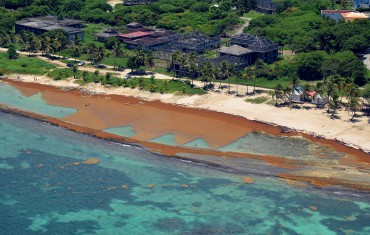 «We have calculated that around 10 million tons of Sargassum have reached the various Atlantic coasts in 2011», says Philippe Potin, the French biologist. How can we explain the presence of such large quantities of seaweed in the Gulf of Guinea, and why do they repetitively wash up on the shores, year after year?

To answer my questions, Philippe Potin encourages me to get in contact with Franck Mazéas, the man in charge of the marine biodiversity unit at the DEAL (Direction de l’Environnement, de l’Aménagement et du Logement) in Guadeloupe: «At the DEAL, we started investigating the Sargassum since July 2011, he says. In that year, we were surprised to see massive amounts of seaweed washed on many beaches. We have since been trying to understand this recurring oceanic event».

The floating Sargassum travels with the help of oceanic currents. There are gyres where the seaweed accumulates, such as the Sargasso Sea, and sometimes, the detached algae travels across the Atlantic towards Europe and may even come back toward the Caribbean along the equatorial currents. The first time a huge amount of Sargassum washed up in the Antilles, the scientists thought the Sargasso Sea’s current had shifted, and that a meteorological event had pushed the algae from Bermuda towards the Caribbean in the South-West. But this theory was dropped after a team of Canadian scientists were able to study a series of satellite images. Jim Gower and his team noticed that the seaweed responsible for the invasion in the Caribbean were in fact originating from a zone near the Amazon, in the opposite direction as first thought. The sargassum then travels upwards with the current towards the Antillean islands. Since this finding, this second accumulation zone in the South has been named «the Small Sargasso Sea».

Franck Mazéas reveals a key information to understand this new paradigm: «In 2010, we noticed that the Equatorial Counter-Current which follows Guyana and Brazil from the North-West to the South-West strengthened considerably during several months. In the meantime, the doldrums, which are these windless areas feared by all sailors, also intensified. We think that a small amount of floating seaweed naturally drifted into the area, and got trapped with nowhere to go. Later, the nutrient rich waters coming from the Amazon enabled the sargassum to multiply with virtually no competition».

«This counter-current event had never been observed before 2010, the French scientist adds. Even if this new paradigm is somewhat related to climate change, the seaweed proliferation in front of Brazil is undoubtedly the direct result of massive amounts of nutrients that are washed to the sea by the Amazon. It is important not to minimize the pollution coming from man’s increased activity».

Indeed, while there is an agricultural intensification in Brazil, with the clearing of forests, the transformation of mangroves into shrimp farms, along with rapid urbanization, the natural ecosystems are less and less capable of filtering the water. As the largest river in the world, the Amazon, carries all this artificially rich water to the sea, it adds up to the existing and natural nutrients. «Saharan dust clouds, which are very rich in iron, naturally travel towards the Caribbean and form an important source of food for the marine world», Franck Mazéas adds. To make matters worse, this part of the world is naturally subject to large amount of nutrient that rise up from the depths. The combination towards a rapid development of floating seaweed is perfect. 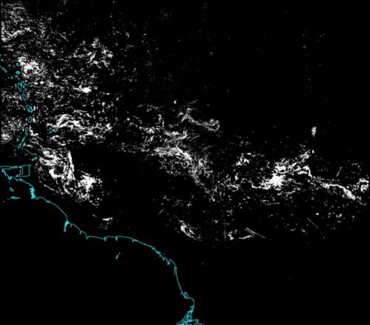 Back in Abidjan, Yacouba Sankaré points out that «the Sargassum that makes its way to the Gulf of Guinea is originally from the accumulation zone near Brazil. The oceanic current carries the seaweed close to the African coast, where untreated water from large rivers flows into the sea. It’s a formidable opportunity for the algae to get all the nutrient it needs for its development».

For the Ivory Coast researcher, there is also another possible explanation for the rapid development of the floating sargassum: «In the Gulf of Guinea, the maritime traffic is intense with the thriving oil industry. From the vessel’s ballast water discharge, we often notice hydrocarbon pollution that are usually beneficial to macro algae». This conclusion is all too familiar with the BP Deepwater Horizon accident in 2010 in the Gulf of Mexico. Although Franck Mazéas remains careful on this subject: «The seaweed moves around. It takes between 10 months to a year for the Sargassum to reach the Caribbean from the sea. The oil rig accident was often at the top of the list when scientists met to discuss the large wash up of seaweed on the beaches. The Corexit, the dispersive product that was used was thought of as a possible cause of proliferation, but nobody was ever able to prove these allegations».

If we try to resume, we will find that oceanic current and waters rich in nutrient form a perfect cocktail for the new Sargassum incubation zone off the coast of Brazil. Research is under way to fully understand this complex and unpredictable situation. «At the end of the day, we still don’t know why this massive wash-up of seaweed occurs since 2011. Furthermore, there was absolutely no Sargassum on the Caribbean beaches in 2013, and there is yet no scientific explanation», Franck Mazéas says. It is still too early for the scientific community to reach conclusions. In the meantime, thousands of people on various coasts have to deal with tons and tons of stinking seaweed, and have resolved to fight against the invasion…